Views from the Skywalk

Going for a simple walk can be quite a challenge in Bombay.  The pavements are broken, there are usually dogs and people (not in that order) randomly lying around, you are liable to disappear down open manholes, rickshaws often want to chase you up the sidewalk, people coming in the opposite direction will never move out of your way, and there is very little in the way of parks or foliage to enjoy whilst you are dodging all of the above.  Taking a simple walk is really a basic human right and one of the things I miss most about our green and pleasant land (i.e. the UK).

So yesterday (being a bank holiday), I persuaded Mr Jules to go for a stroll on the Skywalk.  Now obviously this isn't exactly the same as a ramble across the Sussex Downs (although we did see a few cows), but it is as near as we are going to get to an uninterrupted walk in this crazy city.

The Skywalk is an elevated walkway between Bandra Station and Bandra Kurla Complex, an expanding and modern office area to the east of Bandra.  On the Skywalk, there are no beggars, no random animals or persons lying in your way, no trash, no spit (specifically banned!), no hawkers and yesterday..not that many other people full stop.  It is constructed of bright yellow struts with roofing to keep off the monsoon rains and even has the occasional bench and rubbish bin. I expect that during the week, workers in their office uniforms (the men in grey trousers with short sleeved shirts with their pens in their left hand pocket) stream across the Skywalk on their way to work, probably completely disregarding the chaos that co-exists beneath them.

From the elevated position of the Skywalk it is literally possible to pass though all levels of life and livelihood (you will see what I mean from the photos below).  You start by entering up the stairs at Bandra station and passing through the station itself - a pretty hectic place with bodies coming at you from all directions.  Straight away, you find yourself right over some disused train tracks, lined on all sides with slum buildings.  You have never seen such filth nor such a bad example of rubbish dumping in your life!  During my four months in Bombay I have seen more rubbish than your average Englishman will see in his whole lifetime - but this still left me pretty shocked (not to mention disgusted).  Then you see the children in amongst the squalor along with the crows and the dogs and you are left wondering what you can do about it (nothing of course).


You carry on walking for a bit, peering over the tops of the two and three tier slum buildings which are about at eye-level...the corrugated and plastic sheeted roofs, the multitude of satellite dishes (never ceasing to amaze me), the women hanging out of doorways at the tops of ladders, the walls of their little homes seemingly inadequately nailed together.  Everything is ramshackle and crooked and looks like it should fall down at any minute.  More rubbish, more children playing.  Then you see the huge pipes carrying water down from Powai lake into the city and again, more children playing in the small ponds that have formed in between them, sharing space with goats and cows.

I try not to harp on about this side of the city as I intend to always show Bombay in a positive light - but then again it would be unrealistic to do so.  Bombay is plain filthy.  Bombay has naked, diseased, malnourished kids roaming free in amongst the squalor.  It is all very plain to see from the Skywalk, nothing is hidden.

Then you turn the corner of the Skywalk and you immediately start to see changes in the 'scenery'.  There is a large patch of land next to a narrow canal where farmland is being cultivated.  It seems to be nicely fertile - there are even egrets sticking their heads out of the vegetation.  No-one is occupying it and it is virtually naked of rubbish - a bit further down is a tiny shanty - the 'farmer's' home I assume.

﻿
Then you turn another corner and you start to see properly built buildings.  All offices.  The first one you notice is the Slum Rehabilitation Authority.  "Nice offices" I think to myself.  Something not quite right about that.  Then you see the manicured lawns of Indian Oil with a tall, white, nicely maintained building behind.  As you go on, there are more and more 'nice' buildings.  I also think to myself how quickly we have gone from the virtual 'hell' of the slums to the 'heaven' of high-tech architecture. Literally in the space of ten minutes.

After a quarter of an hour or so we come back down to earth at Bandra Kurla.  We walk a little further up the finely tarmacked road with its perfect sidewalk until we reach Le Pain De Quotidien and decide to go in for Earl Grey Tea and pastries.  Ummmm....now this really is heaven. 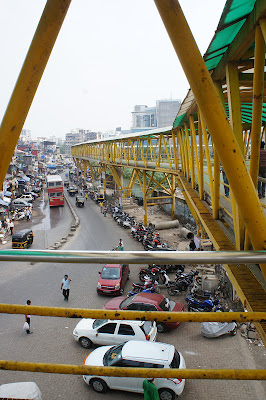 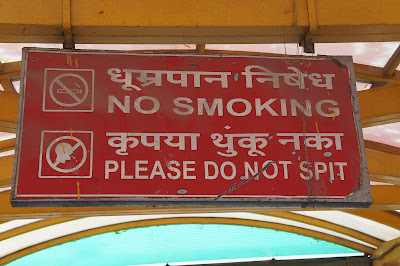 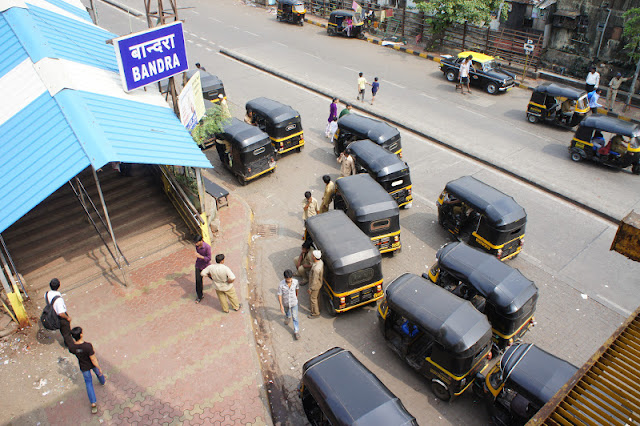 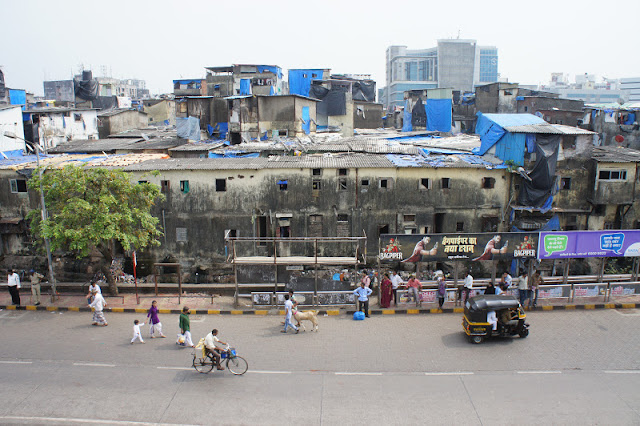 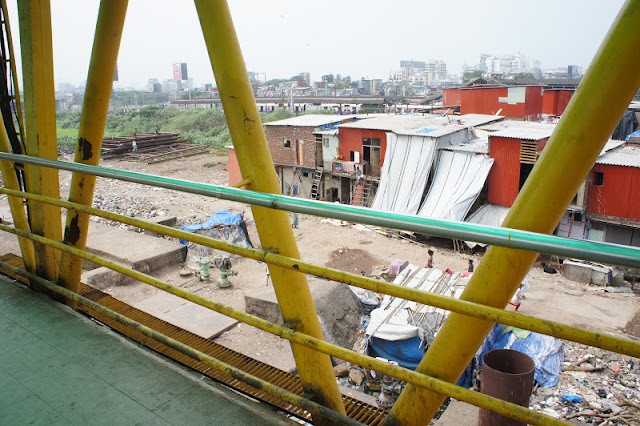