How to Spend 48 Hours in Mumbai

Your BombayJules tour is now finished! 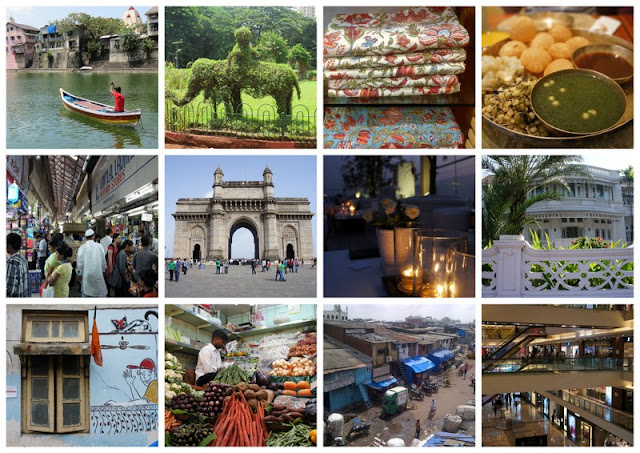 OK not quite tick.  For one it was was my friend The Jolly Runner who ran it and not me.  And secondly, I only did the 6k Dream Run (which I walked!).  But what a great day.  The Jolly Runner ran the Half Marathon in a very impressive 2 hrs 29 secs, raising much needed funds for my NGO.  Along with 30 other marathon runners, we also managed to get a group of about 65 staff and committee members and supporters/donors to walk the 6k Dream Run - and it was a really fun day.  Thousands of pounds were raised to fight the scourge of malnutrition in Mumbai - thank you to my in-laws for sponsoring The Jolly Runner and to anyone else reading this who took part and raised funds for FMCH. A truly memorable day.
So now I am putting my 'Back Soon' sign up again.  For the Jolly Runner and I are about to go on a week of travels.  Firstly visiting the Taj Mahal (yes, the third time for me!) followed by five days in Kerala - Cochin, Munnar and Kumarakom in the backwaters. Unfortunately Mr Jules gets left behind whilst I am off enjoying myself. Sorry Mr Jules, I will miss you!
I will have so much to report when I get back including some more photos of the marathon and the amazing Indian wedding that The Jolly Runner and I attended a few days ago.  And I am sure there will be one or two photos from our trip.
So bye for now, I will be back at the end of January! 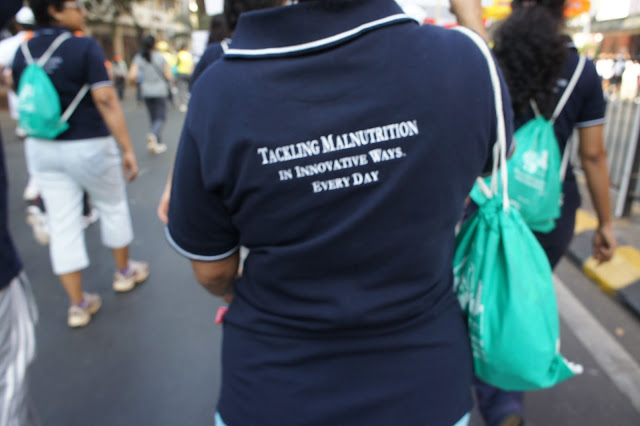 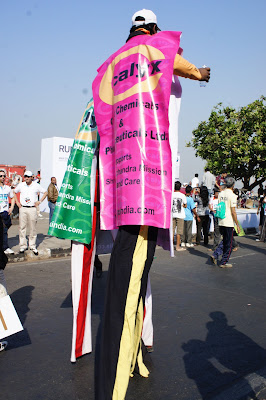 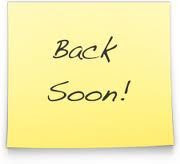 After looking downwards so much for yesterday's post about Mumbai pavements, I thought it would be appropriate to look a bit more upwards today. In fact, right up to the sky for the Makar Sankranti kite flying festival.  Well try to at least....I wasn't so successful!
Makar Sankranti is another auspicious day for Hindus (there seem to be so many!) and in the western Indian state of Gujarat, these celebrations are the biggest. People offer thousands of their colorful oblations to the sun in the form of beautiful kites. The kite flying is a metaphor for reaching up to their beloved God - the one who represents the 'best' and it is also to honour, worship and pay respect to Saraswati (the Goddess of Knowledge).

Today, we went to check out Juhu Beach - a good stretch of open space near to a large Gujurati community in Vile Parle (pronounced Villa Parlay!) where we were assured of a magnificent display of kite flying.  However, I am not sure if it was because we went at the wrong time of day (likely) or if it was just not happening - but we didn't see too much of a kite flying spectacle.  Instead, there were just a handful of families and a few groups of youngsters playing with their kites. But it was such a lovely day on Juhu beach, that there were still plenty of colourful sights to see. 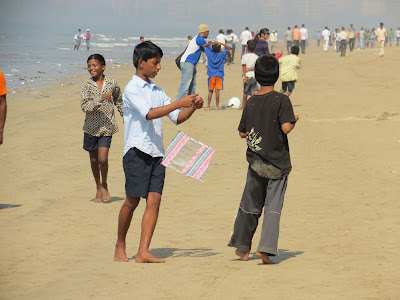 Taking a Trip on Mumbai Pavements

I mentioned in my post about the Bandra Skywalk that it is almost damned near impossible to take a straightforward walk in this city. This is because the pavements are absolutely appalling!  You literally take two steps backwards for every one going forward in order to get anywhere. There is not much I like to complain about in Mumbai but the state of the sidewalks is definitely one of them.
When going out to the local market (that's about as far as I can manage on foot), not only do I have to dodge rickshaws, cars, humans, dogs (and the odd cow/horse), but I have to constantly be alert for maintenance problems such as the giant gaps over open sewers, cracked manhole covers, torrents of water from leaking pipes and errant paving blocks.  And each and every time that I gingerly step over those wobbly, cracked manhole covers, I wonder if they might cave in (resulting in me appearing in some hilarious You Tube video).
It is highly evident that poor civil engineering has led to the pavements being so wonky in the first place, and that this has been further exacerbated by the use of poor quality materials and cheap labour (a problem that manifests itself in so many areas of Indian life).  There is an absence of asphalt and concrete - materials commonly used to fabricate walkways worldwide. Instead, the pavements in India are assembled using a jigsaw of paving blocks (pavers) which easily dismantle and decay.
Without any kind of planning regulations you will also commonly find these obstructions built right into the middle of the sidewalk: mini electricity substations (!), bollards, lamp posts and advertisement hoardings; trees that grow out of the pavements, or trees that lean over from nearby properties that are not trimmed back; parked bicycles, cars and trucks; street-vendors sitting cross-legged in amongst their wares; piles of rubbish and dog poo, and even people's laundry left out to dry. At every street corner or at the corner of every driveway, you have to step down about a foot onto the road because there is no such thing as a mountable curb.  So you are up and down....down and up....up and down and so on. You can now begin to see that going for walk in Mumbai is more like completing an army assault course with a step class thrown in. And it will make you sweat just as much!
In fact most people (self included) do not even bother to walk on the pavements.  It's better to just walk on the comparatively flat road, even if it means getting your feet run over by the tyres of traffic whizzing past or being cut up by rickshaws.
Taking a proper stress-free urban walk is one of the things I really miss about the UK.  Popping to the supermarket; strolling through the park; walking to the train station for my daily commute into London. The state of Mumbai pavements also means I can no longer wear nice pretty heels - if you wear anything other than (solidly built) flatties whilst going shopping for your veg, you run the risk of turning an ankle or tripping up - either that or it will take you three times longer to pick your way through the pavement obstacles.
Here is the photographic evidence from in and around Bandra:
﻿
﻿

Email ThisBlogThis!Share to TwitterShare to FacebookShare to Pinterest
Labels: Bandra

The Sleeping Beauties of India

I am always very impressed by the ability of Indian working class men to sleep absolutely anywhere. Pavements, park benches and beaches are not just the (unfortunate) domain of the destitute or drunk. If an Indian man wants or needs to go to sleep - then he's gonna go to sleep.  Right there and then. On the sidewalk, on a broken wall, on a dirty beach, on a rare park bench.  I have seen them curled up in tuk-tuks, horse and carts and taxis (hanging their legs out of open doors). I have seen them asleep in the middle of their own market stalls.  At worst, I have seen a man sleeping on a one foot wide wooden plank which had been hung off railings on the side of a busy vehicular underpass.  Boy I wish I could have got a picture of that one...quite unbelievable to see this man fast asleep whilst trucks and buses were bombing past within a hair's breadth of his perfectly balanced body.
﻿
﻿
I am not even sure that the desire to sleep in the middle of the day is borne out of a lack of night-time sleep.  Perhaps it is the heat of the city, perhaps it is a lack of work, perhaps TOO much work.  I expect Mumbai life is just too damn exhausting for them.

Do women ever go to sleep in this way?  I have never seen it happen.  I guess they are too busy managing households and looking after children whilst their husbands are snatching zeds. Or maybe they have too much dignity?  Either way, I always giggle when I see men sleeping in strange places - as it is usually quite comical!
Probably rather inappropriately, BombayJules does like sneaking up on these characters paparazzi style - so enjoy the photos:

Post Script Dated 2nd August 2013
I just so happened upon this picture blog today: http://mumbaisleep.tumblr.com/ It contains some beautifully photographed examples of Sleeping Mumbai.  Check it out!
Posted by BombayJules at 11:23 4 comments: