My friend Ze German was leaving town.  A very sad day but we decided to make the most our last few hours together by doing a whirlwind tour of South Mumbai. We visited Banganga Tank (more on that another time), walked the manicured lawns of The Hanging Gardens of Malabar Hill, took in the view of The Queen's Necklace with a million other Indian tourists, ate Pani Puri and finally watched the sunset go down over the Arabian sea whilst drinking spritzers at the Dome Bar.  What a lovely day.

We also visited Haji Ali - which was the first time for me and so I thought it worth mentioning here.  Haji Ali is one of Mumbai's very few and most distinctive tourist sites - a Mosque and tomb (Dargah) on an islet just off the coast of Worli.  I had driven past the entrance to Haji Ali countless times and thought it looked a little crazy, being crammed with people and hawkers.  I could also see from the coast road, people streaming across the causeway like ants and wondering where they all ended up at the other end - surely there wouldn't be enough room for all of them in that small building!

When we arrived, the guards were about to cordon off the entrance.  It was prayer time.  Already there were 30 or so men crouched over on their knees right by the gate.  We tiptoed past and went ahead to the start of the causeway.  Which was jam-packed on both sides with stalls selling all manner of junk.  Bangles, scraps of cloth, sunglasses, plastic cars.  All that was missing were effigies of Muslim gods made from wax (thankfully persons of the Islamic faith do not seem to go in for that kind of tat).  As we progressed further up the causeway, we passed beggar after beggar, a couple with some pretty horrific deformities.  More upsetting, I saw a toddler, perhaps two to three years old sat cross legged by her begging bowl, trying not to fall asleep under the scorching sun.  Man, these sights break your heart.


Once we crossed the causeway we were immediately in front of the beautiful white marble gate leading to the mosque itself.  It was still prayer time and even though I took some pictures of the crowd of kneeling men, we didn't enter the mosque - the time was not right with everyone seemingly in such deep contemplation.  Besides which a) it was boiling hot and I wanted to get back to my nice AC car b) we had forgotten to bring dupattas to cover our heads c) we were being stared at.  I should mention that Ze German is a fair skinned, six foot model like creature whom every Indian under the sun wants to have their photo taken with.

After a quick tour around the gate area, we walked back up the causeway - the midday sun was now at its worst.  Bizarrely (and actually a rather good money making scheme), there were several beggars on the sides of the track with bathroom type weighing scales.  Ze German, who in the three months I had known her had only ever complained about not being able to stop eating curry, decided to pay her two rupees to weigh herself.  So she got on one of the scales and shrieked!  "XX Kilos?? "Zis can not be right!!" Disheartened she got back down off the scales and we continued on (I was smirking, glad not to be the only one to suffer the effects of too much ghee).  About fifty paces on, we found another guy with similar weighing scales.  Ze German (who obviously thought the last lot were broken) decided that she would pay another 2 rupees to get 'a better opinion'.  Ze German got on the scales and cried "....oh I am four kilos lighter here, zis must be right ja?".  The second scales were either right, or she had instantly lost weight through walking 50 paces in the sweltering sun or there had been some divine intervention from Mohammed....maybe the prayers had worked, I am not sure. 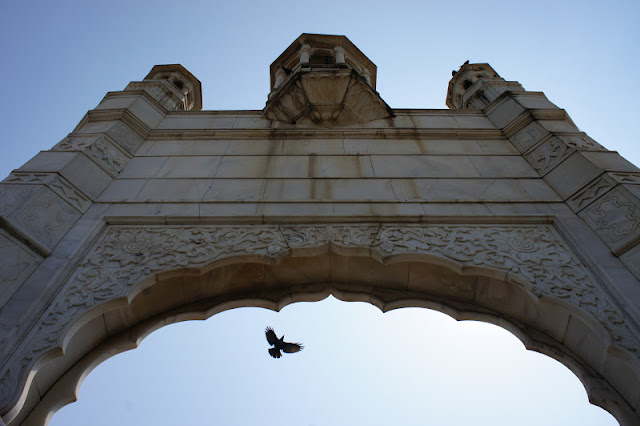 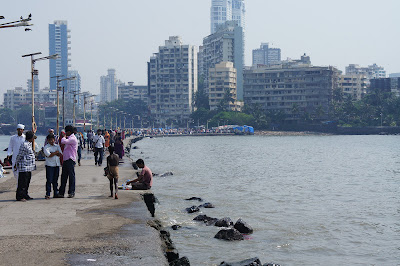 Haji Ali Mosque is worth a visit, but go very early or later in the day when the sun in milder.  The walk out to sea across the causeway is pleasant, if a little marred by the presence of active beggars - and the view back to the coast is interesting.  12.30 is prayer time.  And it's free.

A Wikipedia summary of the Haji Ali Dargah 'Legend':

The Haji Ali Dargah was constructed in 1431 in memory of a rich Muslim merchant, Sayyed Peer Haji Ali Shah Bukhari (R.A.), who gave up all his worldly possessions before making a pilgrimage to Mecca. Hailing from Bukhara, in the ancient Persian Empire and now in Uzbekistan, Bukhari travelled around the world in the early to mid 15th century, and then settled in Mumbai.

According to the legends surrounding his life, once the Saint saw a poor woman crying on the road, holding an empty vessel. He asked her what the problem was. She sobbed that her husband would thrash her since she had stumbled and accidentally spilled the oil she was carrying. He asked her to take him to the spot where she lost the oil. There, he jabbed a finger into the soil and the oil gushed out. The overjoyed woman filled up the vessel and went home.

Later, Pir Haji Ali Shah Bukhari (R.A.) had a recurring - and disturbing - dream that he had injured Earth by his act. Full of remorse, he soon fell ill and directed his followers to cast the coffin carrying his body into the Arabian Sea, once he died. Haji Ali left this world during his journey to Mecca and miraculously the casket carrying his body, floated back to these shores, getting stuck in the string of rocky islets just off the shore of Worli. Thus, the Dargah was constructed there.

On Thursdays and Fridays, the shrine is visited by at least 40,000 pilgrims. Irrespective of faith and religion, people visit the 'dargah' to get the blessings of the legendary saint. Sometimes, especially on Fridays, people may find various sufi musicians performing a form of devotional music called Qawwali at the Dargah.

A full Wikipedia history can be found here http://en.wikipedia.org/wiki/Haji_Ali_Dargah
The equally famous Haji Ali Juice Centre is right at the entrance although we didn't try it (not without taking prebiotics first) http://hajialijuice.com/juices/
Posted by BombayJules at 21:31