Shopping for Balcony Plants in Santacruz

A Finnish friend recently told me that it was possible to buy good houmous (hummus) at a cafe in the shopping centre at the Grand Hyatt Hotel in Santacruz.  I think it is possibly a crazy but normal expat activity to hunt down singular food items at the weekend when one is feeling the need for something relatively bland (or just European).  So please don't think us odd for driving 30 minutes just to get some houmous or for going to a hotel complex to find it! Also I wanted to check out the Mumbai branch of Bhandej clothes designs that I had discovered in Ahmedabad - but I didn't tell Mr Jules this.

Happily, we succeeded in finding the houmous (which they freshly made for us!) as well as steak & onion pies in puff pastry and sausage rolls (oh HEAVEN!), together with some Thai green curry paste actually manufactured in Thailand (the packets you normally get locally are made in India and bear no resemblance whatsoever to the real stuff), almond croissants (does there seem to be a bit of a puff pastry theme going on here?) and a tin of John West Tuna.  Result.  This cafe is really an outpost for posh expat foods which can be ordered in and picked up at your leisure.  It's OK to be 'curried out' isn't it?

Better than that, we discovered just before the entrance to the Grand Hyatt, a stretch of road with a long string of plant sellers on it.  A sort of al-fresco gardening centre retailing a wide range of good quality outdoor and indoor plants.  Back 'home' in the UK Mr Jules is a semi-enthusiastic gardener (I'd say a fair-weather one) so he was keen to inspect what was on offer, with a view to making some purchases for our sitting room balcony.  So we got out of the car and walked along the long rows of foliage until we saw something that took our fancy.  Unfortunately I do not know the names of many of the plants but there was a huge variety of evergreen and deciduous greenery, flowers and shrubs, some with eye popping colours, some tall and some small.  If you pick out what you want, the shopkeepers will eagerly sell you a plastic pot for 50-100 rupees (depending on the size) and then pot it for you using soil from a nearby pile.  Very efficient really, you wouldn't get that service in the UK!  We chose a couple of spiky leafed plants and we were going to add a few more similar sized ones until a large and fabulous bougainvillea caught my eye.  Such a beautiful deep pink colour!  I negotiated a price of 750 rupees including the pot and soil. OK, he stated the price and we didn't argue - £9 for this lovely tree really wasn't much.

Only when it was too late and money had changed hands did we realise that we possibly would not get the tree into our regular sized saloon car.  After some heaving and moving of car seats and shedding only a few of its leaves, we somehow managed to squeeze our new bougainvillea in behind the front passenger seat. It took four men though - Mr Jules, our driver and two stallholders. We drove home with Mr Jules in the passenger seat and the tree tickling his neck from behind.  Our lovely bougainvillea is now in place on the balcony - all we have to do is try and keep it alive.

I recommend that any Mumbai resident go along and have a look at this 'garden centre', even if it's just to see something green. The plants are a fraction of their equivalent price abroad and in a city where outside space is at a premium, it's nice to spruce up the ones that we do have. Just remember to allow for the transport of very tall or wide plants!

Al-fresco garden centre at CST Road (Hans Bhugra Marg) off the Western Express Highway on the way to the Grand Hyatt Santacruz. 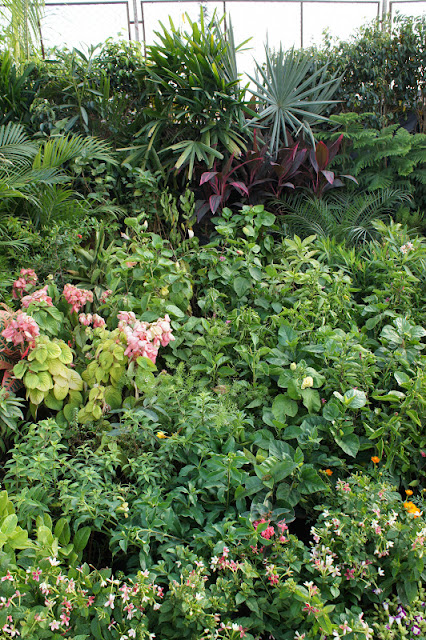 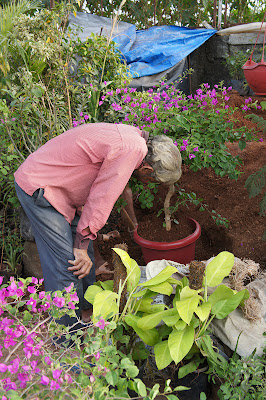 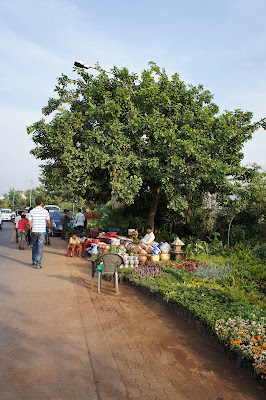 PS Bhandej did not receive any custom from me this time.
Posted by BombayJules at 19:40