I received an email today that made me so happy.  It concerned the cameras that were donated by followers of the blog to a Reality Gives project - please read this post and this post.  To cut a long story short - I went to an exhibition of photographs taken by the kids of Dharavi ('Asia's largest slum') and I was so blown away by what they had achieved that I asked readers to donate cameras to the project - so that more children could benefit from photography classes initiated by the NGOs Reality Gives and Bombay Underground. We received nine cameras (successfully brought back in a suitcase from the UK by Mr Jules despite heavy questioning by Indian customs at the airport!) and I took them down to Dharavi last June.

I had been meaning to follow up on what had happened with the cameras - and as it transpires, they have been put to fantastic use.  Because it has not just been the children of Dharavi who have been able to make use of the equipment.  Through this latest project (described below), a select group of women were taught to be self-confident and self-aware through the medium of photography. 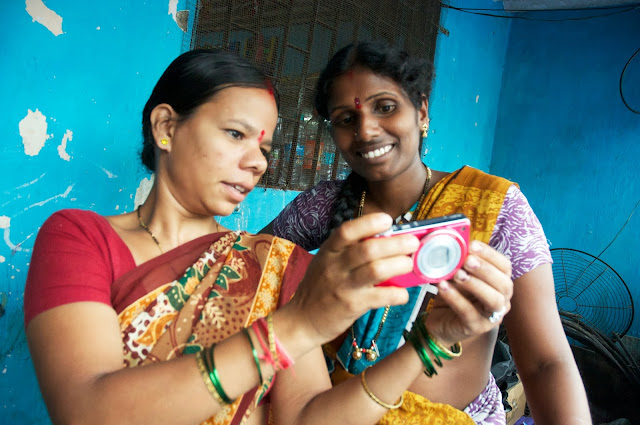 Here is a report from Joanna who kindly emailed me this morning with the news and photographs from the programme:

"The project ‘ladies only – stories for all’ was a collaborative venture between myself, Joanna Wingate, and Aqui Thami, from the Art Room. The workshop ran for 10 sessions, 2 hours a session in Dharavi, Mumbai.
The workshop focused on using photography, story telling and interviews, as a way of expressing how to be ‘free’ in a safe environment. The aims were to create positive awareness and raise self-confidence, and to build new relationships between the 5 participants.
We believe we achieved this as far as possible in the short time available. It was the first photography workshop for women in Dharavi. I taught them new skills, using basic camera techniques including: angles, composition, different props such as the use of tripod, and reflector. We followed various themes, such as ‘faceless portraits’, ‘abstracts’, ‘a day in a life’, and environment and street photography. I am certain, that most of the participants, loved ‘portraits’, which was their favourite. They imagined being somebody else - such as a Bollywood star for one session. At the end of the project, we went on a trip to Colaba, looking at different galleries, focusing on ‘Photography’ and ‘Women in Indian Photography’.
I conducted the sessions in English and Aqui, translated the workshop into Hindi for the group. This was the first such experience for me. Our group was a multi language group! English, Hindi, Marathi and Telegu.
One participant told us that she felt ‘young, free, and not having to worry about marriage, life, and children during the session’. For me, that was a positive step, to help the participants to be themselves and relax in a safe environment. Another participant said that she likes to dress up and feel good about herself in the sessions. I was so encouraged that they really enjoyed spending time together. Even though they had much work at home, they still made an effort to come each time, and did not drop out during the 10 sessions, as they created something new.


I hope the audience will enjoy the participants’ images - Amirita, Anuradha, Kaveri, Nirmala and Shobha. You can see them at the exhibition and in our photo book"

The work culminated in an exhibition at the Art Loft in October which I unfortunately missed due to travelling. So I would like to say 'well done' to Joanna and her team for doing such a fantastic job with these women. And it's so inspiring when you hear of other expat women using their skills and doing something so worthwhile with their time. 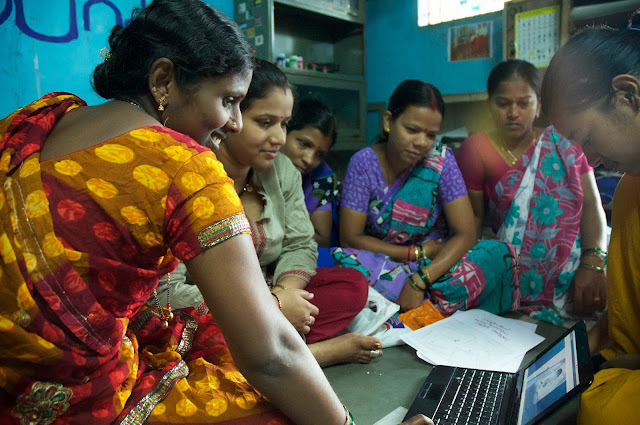 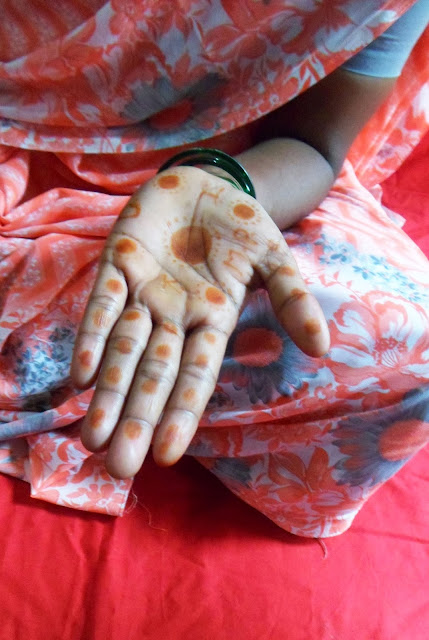 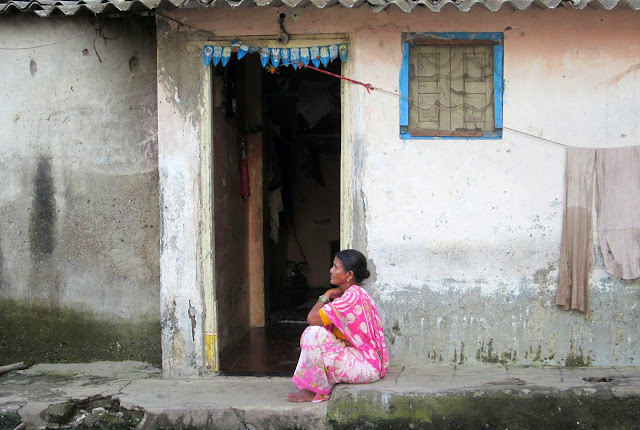 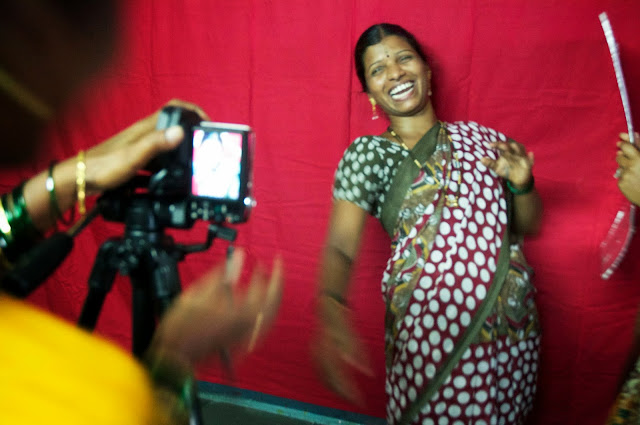 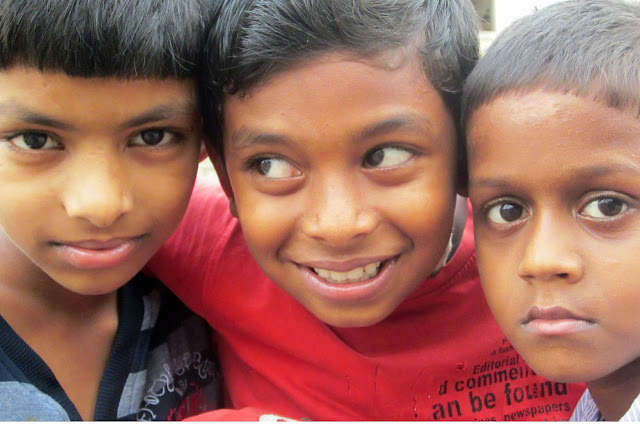 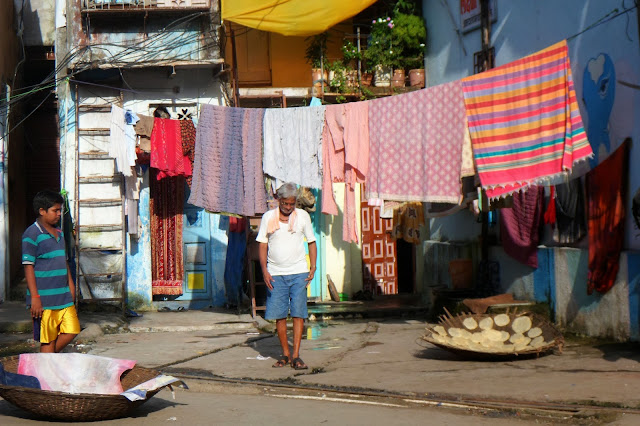 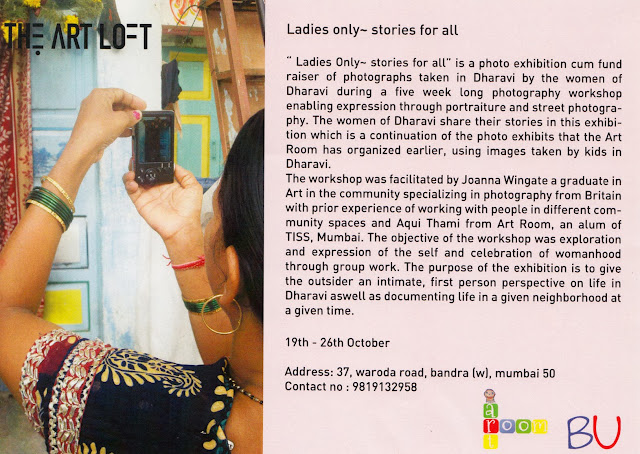 Thank you Joanna and Aqui, you've made a real difference to these women!
Posted by BombayJules at 14:22