Last Saturday morning, after sturdying myself with a nice sneaked-through-customs-Waitrose-bacon bap, I had taken myself off to the World for All Animal Adoptathon in Bandra.  Minus Mr Jules. And just to have a look you understand. I had seen lots of pictures on Facebook of cats and dogs needing homes - so just paying my 50 Rs entrance fee would do good right?

As I entered the room (packed with people and animals), I saw a man holding a white puppy with black spots and for some reason, immediately felt disappointed.  Someone had already adopted that gorgeous dog? (But that's OK, because I was just there to have a look remember?).  I went up to the man holding the spotty dog and started to stroke him (the dog not the man). The man - a big fella with a booming voice told me that he was just cuddling the dog and that he was still available if I was interested.  I said "who me? no I'm just here to look at the animals!" Within a second he had plonked the puppy into my arms and told me that I would make the perfect mum.  Well who was I to argue?  Without hardly any hesitation, I said I wanted to take him home.

Then before I knew it, I was grabbed by a World for All volunteer who loudly announced "we've got an adopter!". The whole room cheered and clapped - I was the first adopter of the weekend!  I was then dragged up on to the stage and asked to make a speech (they love that in India) and all I could think to say was "errrr, ummm, errr my husband is not going to be very happy with me!" This place felt more like Alcoholics Anonymous than a pet adoption centre (not that I'd know what that feels like, obviously!)

I was then interviewed to make sure I was a suitable human (hmmm) and asked to fill in some paperwork. Although he obviously has some Dalmatian in him, my puppy is fore-mostly a street dog (Pariah). So I was given specific instructions by the adoption centre on how to raise him. And expecting to just feed him some regular Pedigree Chum puppy food, I was told to give him boiled egg, dhal or yoghurt or chopped liver and rice. What??!!! It was all becoming a bit daunting but then I had to remember that most people in this city can't afford 'proper' dog food - they just give their pets whatever they are eating.

Within thirty minutes of arriving at the centre, I was leaving with my pet puppy.  Mr driver looked very surprised when I walked out with this small, spotty bundle in my arms.

Thankfully, Mr Jules was remarkably calm when I walked through the door of the apartment - he kind of knew what the outcome was going to be as I left the house that morning. We named him Bartlet Bindi - after President Bartlet from Mr Jules's favourite TV series, The West Wing and the fact that he had an orange Bindi on his forehead when I received him.  After this, things started to go a bit downhill.

Within two hours of getting him home, Bartlet started throwing up.  He did not stop.  Then he had diarrhoea all over the place, staining a rug in the process. We just put it down to nerves and being shifted to a new home and hoped that he would be better in the morning.

But on Sunday, we woke up to find that he had messed up his dog bed pretty badly and he was still vomiting. What's more we couldn't get him to eat.  I rang World for All to complain that they had given me a sick animal and didn't know what to do.  They apologised profusely and told me that his twin brother - who was also at the adoption centre was also very sick with dysentery.  Therefore it made sense that Bartlet had the same. Unfortunately it had only become evident that morning and the dogs' previous foster parents had already done a runner.  Great.

We immediately took Bartlet to a vet (provided by World For All) who, after an initial inspection, looked very concerned and put the dog straight on a drip.  Barlet was severely dehydrated. The vet then told us that he suspected 'parvovirus' - a viral infection that is 'terminal' (I did not find out until later, that this is not, strictly true - it's quite treatable providing it has been caught early enough).  Of course, I started to cry then - there was no way I could deal with a terminal patient.

The vet gave him some anti-biotic injections and we got Bartlet home.  He slept for virtually 24 hours but with less incident during the night.  The next morning, I took him to see the vet again, who seemed pleased with his progress but gave him another IV drip and some more injections.  Bartlet was strong enough to fight against the insertion of the drip - so it was obvious he was very much better.

From then on in he improved very quickly. Yesterday, we woke up to a very bouncy and over-excited dog. I took him to the vet again yesterday for one final time. The vet gave me his final diagnosis of not potentially fatal Parvovirus - but severe food poisoning coupled with a change in environment.  Thanks a lot for the scare!

I am pleased to report that Bartlet is now 80% of the way to being well - he just needs to rest a lot now. 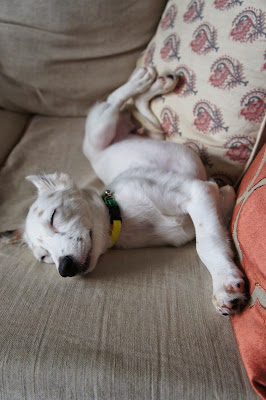 If you are interested in adopting a pet in Mumbai, please check out World For All's Facebook page:

Email ThisBlogThis!Share to TwitterShare to FacebookShare to Pinterest
Labels: Dog