Having seen this side-cap on a lot of working men in and around the state of Maharashtra - I thought I would research and write something about what I now know to be called the 'Gandhi Topi' (or Gandhi Cap).

I firstly thought that the cap was just part of the uniform of the Dabbawalah - the 5,000 men that gather and deliver over 175,000 tiffins in Mumbai every day (see my post here).  But then I have also seen the hat being worn by men working in the fields on the way to Goa, I saw some older gentlemen donning them on a safari in Tadoba and I've seen them worn by Koli fishermen in Worli.  The topi tops off an outfit normally consisting of white shirt or kurta and trousers (and must be a menace to keep clean!)

I asked our driver what the cap meant and why it was worn.  He replied that it is worn to show that a man is a 'proud Maharashtrian'. Upon further investigation, it transpires that the headwear is much more important than that.  Worn by Mahatma Gandhi, the cap became very popular during the Indian Independence Movement and has since become a symbol of the fight for independence, being commonly worn by politicians and political activists. Also a symbol of simplicity, Gandhi's Indian clothing (kurti pyjamas made of homespun Khadi cotton) gave a message of cultural pride and solidarity amongst India's rural masses. His trademark cap soon became part of the uniform for most of Gandhi's followers, and is still popular today amongst India's working classes - particularly in Maharashtra.

What a lot of people don't know is that the actual origins of the cap in its current form, was part of Gandhi-ji's uniform when he was jailed for two months in a South African prison. Working as a lawyer, Gandhi was in South Africa between 1893 and 1914 and it is there where he first witnessed and experienced racism first hand. In fact, it was in South Africa where he first started fighting for the rights of other Indians, eventually being imprisoned for instigating a satyagraha ("peaceful violation of the law"!). In prison, the cap marked him out as a 'Negro' - which Indians were also classified as at that time.

Gandhi's death in 1948 gave the cap further emotional importance - being regularly worn by Indian leaders such as Jawaharlal Nehru - India's first Prime Minister. The succeeding Prime Ministers wore the same cap (Shastri and Desai) and most members of the Indian Parliament continued to wear the Khadi clothing and cap.

Since then the cap has wandered in and out of fashion but became very popular again in 2011 after Anna Hazare - a prominent Gandhian - started an anti-corruption movement in India (yeah, good luck with that!). In August 2011, thousands of people wearing Gandhi caps amassed at Ramlila Maidan in Delhi to support Hazare on his 'fast-unto-death'.  The hunger strike led to a nation-wide protest in support of his cause. He was successful in exerting pressure on the Indian government as the Lokpal Bill was enacted in 2011 - giving ombudsmen the power to deal with corruption in public spaces. He is still alive.

Although the Topi has now become part of the outfit of today's crusaders against corruption, its enduring symbolism is that of Mahatma Gandhi and his values.

More from my collection of Gandhi Topi shots: 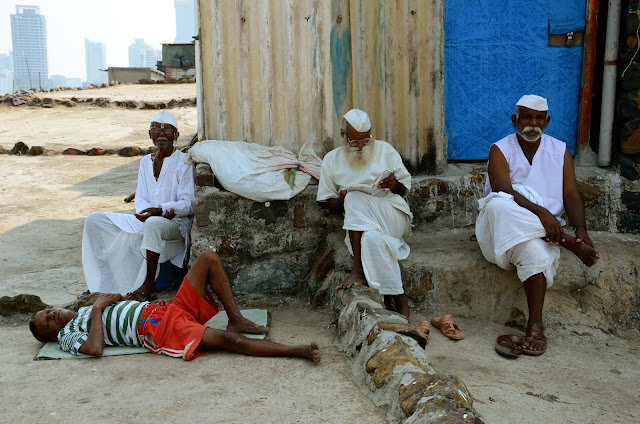 Email ThisBlogThis!Share to TwitterShare to FacebookShare to Pinterest
Labels: Dabbawalas of Mumbai, Gandhi