Dinner with Akshay Kumar in Jodhpur (or not!)

A couple of weekends back - we went to Jodhpur for MaximumCityMadam's birthday-weekend-special - and husbands were invited.  I had been very excited at the prospect of visiting the 'Blue City' and hoped that the place would exceed my expectations.

The flight from Mumbai to Jodhpur was only 90 minutes and upon reaching the airport, we easily found a taxi to take us to our hotel - the Kothi Heritage.  A charming, budget-friendly haveli not far from the airport and quite close to Umaid Bhavan and Palace Street (antiques central). At the time of arranging our weekend, all the well known hotels (such as Ratan Vilas and Raas) were fully booked - but this ended up working in our favour.  We were warmly welcomed with marigold garlands and a refreshing juice drink which is always a nice touch in Indian hotels. The manager at Kothi Heritage was super helpful - booking our cars, finding us places to eat and recommending antiques shops on Palace Street.  This is the kind of personal service that you would expect at a Taj hotel. And all for £40 a night for a Luxury Suite! OK - our room certainly could not compare to a Taj 'Luxury Suite', but it was clean and comfortable and the bathroom was huge. The biggest downside was the immediate surrounding area - one of our party commented that the view from the roof terrace looked just like war-torn Beirut. And the breakfast buffet was rather unimpressive. Thank god for the ubiquitous omelette!

Most of the weekend was taken up with antiques shopping, drinking tea, eating and of course, sightseeing. The main attraction in Jodhpur is the incredible Mehrangarh Fort - a huge edifice that sits atop an escarpment overlooking the Blue City. Started in 1459, most of the current building is from the period of Maharajah Jaswant Singh (1638-1678) - and remained a Royal residence until the completion of Umaid Bhavan in 1943 (see below).

We engaged a guide to take us on a two hour tour of the Fort - which was well worth the small fee (although I was a bit distracted by my camera at times and so couldn't possibly tell you any other interesting facts about the Fort now!).

Mehrangarh Fort is possibly the first tourist attraction I have been to in India where they actually cater to tourists. For one, the building has been meticulously preserved and I saw no signs of littering. There is a proper office where you can buy your tickets and book a guide (who is a professional employed by the Fort, not the usual fake just after your big tips); there are guards in all the rooms - resplendent in traditional uniforms and brightly coloured turbans; and you will also see 'artists' playing flutes, sitars and other musical instruments at different stages on the tour. I am sure this is to give us all that 'authentic' feel, (India, Disney style!) but at least it lends some atmosphere to the proceedings.  At the end of the tour, you will find yourself in a nicely curated gift shop and even more remarkable, is the tea-room with uniformed waiter service (but filled only with American and European customers).  So coming to Mehrangarh Fort, really does make for a pleasant morning or afternoon.

We later walked through some of the Old City's narrow streets to get to the manic Clock Tower bazaar area. Here, I could see only a rainbow of vibrant colour on everything and everyone. Rajasthani traditions dictate that the women wear bright, floaty saris with dupattas or extensions of their saris draped over their heads - virtually covering their faces.  I became slightly obsessed with photographing the backs of women's heads - women bent over market stalls, women waiting for buses and rickshaws, or those groups of women walking along the street laughing and gossiping amongst themselves. Their contrasting head-coverings proving a delight to any keen amateur photographer.

Food-wise, we did very well, mostly thanks to the hunting instincts of MCM.  On the first evening, our hotel manager got us a table at Hanwant Mahal - a wonderful, and barely-discovered-by-anyone-else hilltop venue overlooking Umaid Bhavan Palace. Umaid Bhavan, home to the Singh Royal family since 1949, is one of the most celebrated buildings in India - of which part is now a grand hotel owned by the Taj group.  Drinking our pre-dinner G&Ts on the breezy roof terrace, we were also treated to an illuminated vista of Mehrangarh Fort in the distance. Then after our aperitifs, we enjoyed a truly sumptuous thali in the dining room with another view of Umaid Bhavan through the window. Wonderful!

The next night we were in for an even bigger treat.  Despite the fact that it is not really possible to get a table at the uber exclusive Umaid Bhavan Palace unless you are staying there (at least not without first paying a 3,000 Rs cover charge each), MCM somehow managed to blag our way in.  MCM had already rung the hotel pretty much as soon as we had arrived in Jodhpur, in order to secure us a table for the following evening. At first, the restaurant manager refused - but after some haranguing, he told MCM to call back the next day at 10am on the dot. Being the impatient creature that she is, MCM called back at 9.40am on the dot - but was declined again as he revealed that "Akshay Kumar (a famous Bollywood star that I have actually never heard of) was having a party" so it would be "impossible to accommodate us".

So having previously only being able to admire the Palace from afar, we found ourselves being greeted that night on the steps of Umaid Bhavan - by a doorman with the biggest, most ridiculous moustache you've ever seen!  More staff scuttled out to lead us into the huge dome shaped hallway (fabulous!) - bowing and scraping all the way as if we ourselves were Bollywood stars. I loved it!  We were then ushered up a set of windy stairs to the Sunset Pavilion on the roof of the Palace.  When we arrived, the place was devoid of people but candles had been lit, cushions had been laid out and tablecloths billowed in the wind. The night-time view of Jodhpur was stunning.


Next, one of the immaculately dressed waiters approached us to ask us what we wanted to drink.  We were about to put in our orders for champagne and beer when his colleague nudged him and remarked that actually, we could not have a drink.  What? Following ten minutes of confusion, collusion and whispering amongst the staff we were told again that indeed, we could not have a drink. Not only that, but we would also have to leave.  Charming! Akshay Kumar's party was taking place here in the Sunset Pavilion and we were not in fact on the guest list. Did we actually ever say we were?? Their mistake!

Despite the disappointment over not being able to able to sup G&Ts on the roof with Akshay Kumar, we were happy to make our way down to the rather more sedate 'Trophy Bar', the walls of which are adorned with huge tiger and antelope heads and other hunting ephemera.  We were still slightly wary that we might get found out for not being actual close friends of Akshay Kumar, and being thrown out of the Palace altogether - but we needn't have worried.  It was not long before we were being invited to a sit at a table on the terrace overlooking the beautifully lit, smartly manicured gardens at the rear of the Palace. Sharing a bottle of definitely-not-Sula wine, we ended up enjoying a well executed European-style meal (including rare-in-India ingredients such as foie-gras, scallops, rack of lamb and duck). Truly an experience to treasure.

As we were leaving, we saw nothing of the party on the roof, we saw no Bollywood stars and we certainly did not see Akshay Kumar!

The next day (Sunday) there wasn't much for us to do except pack our bags and get to the airport - as our flight back to Mumbai was early in the afternoon.  We'd all had a really super weekend in Jodhpur - a vibrant, remarkably calm but slightly mysterious city. 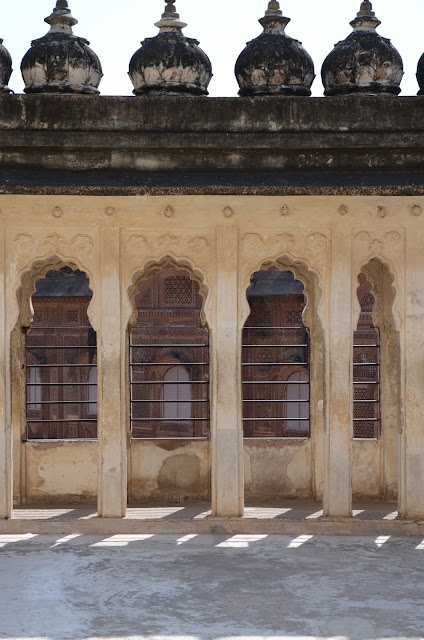 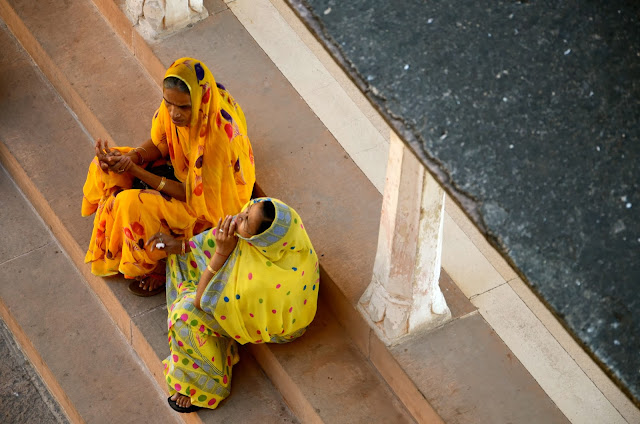 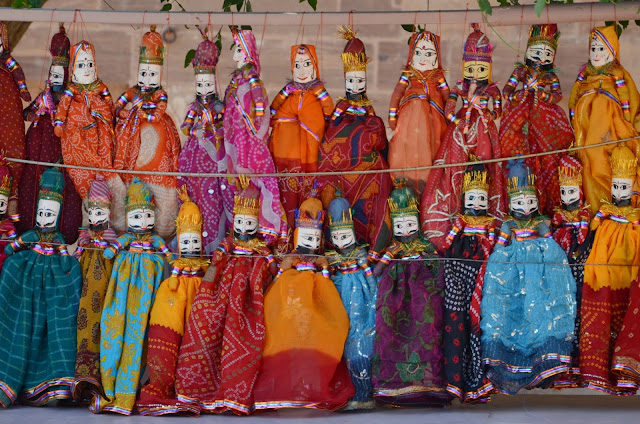 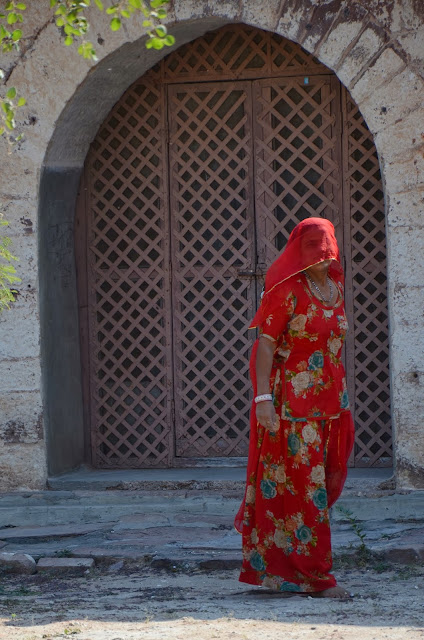 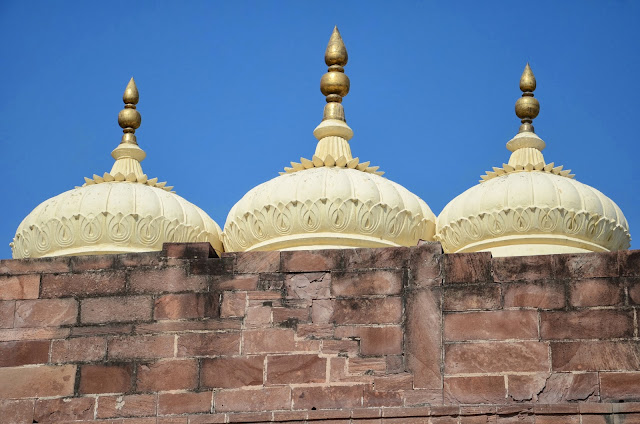 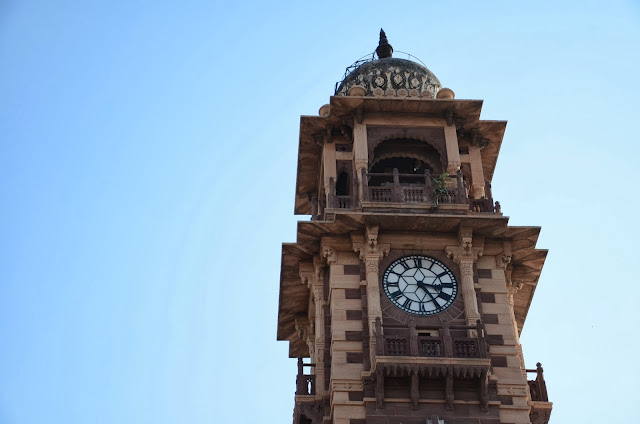 Women I was glad to see the back of (literally): 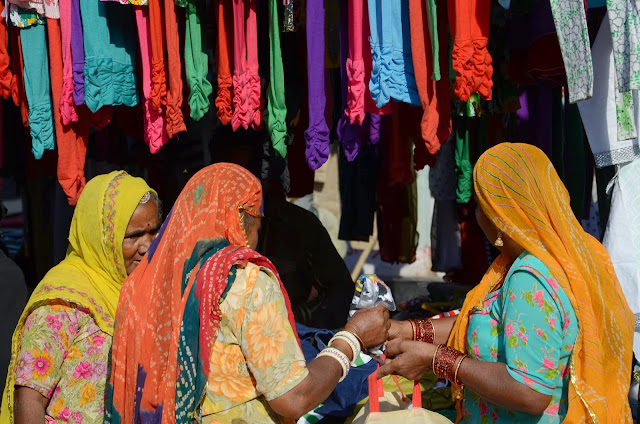 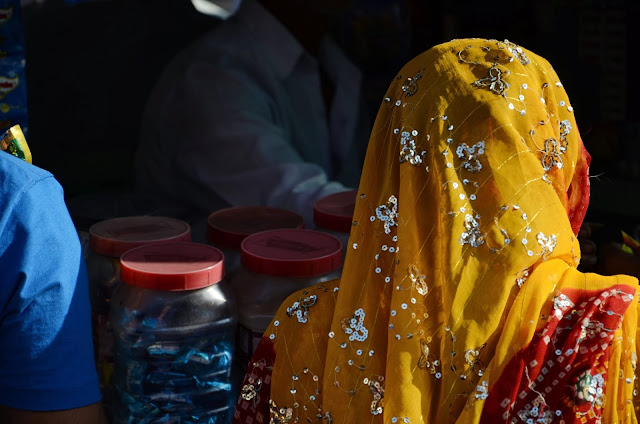 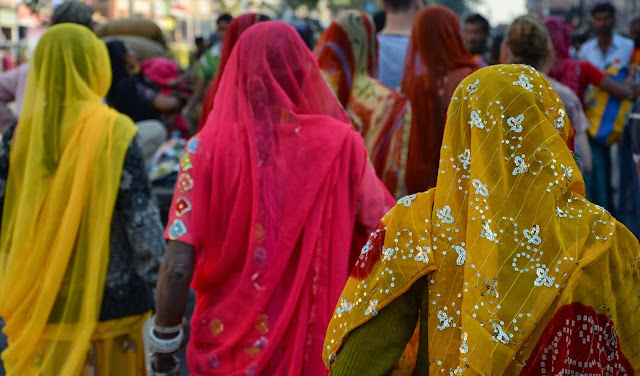 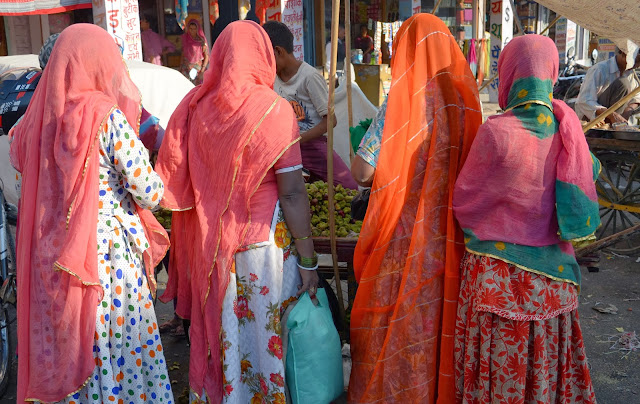 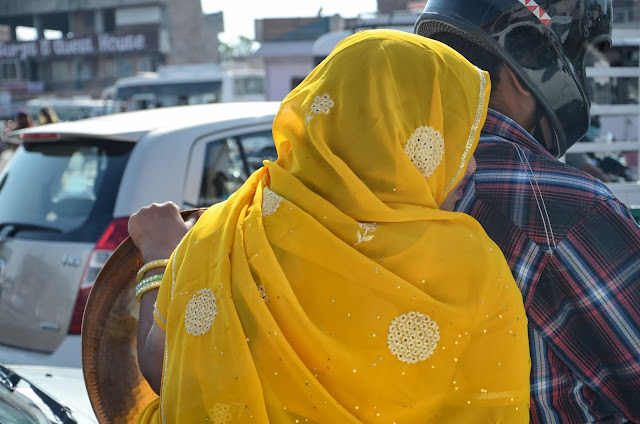 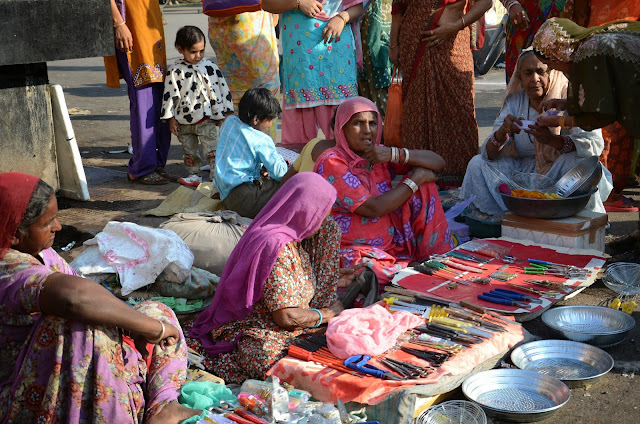 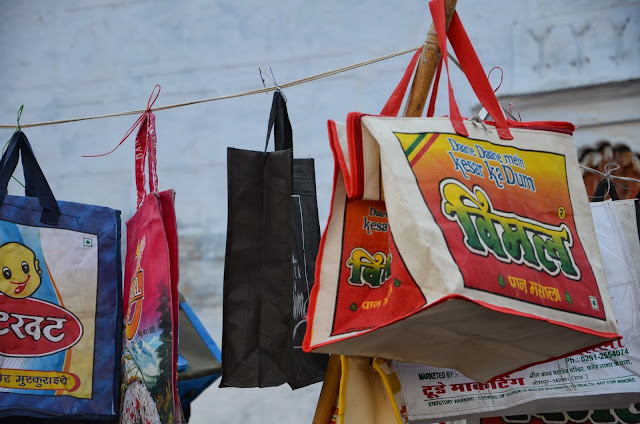