It's slightly ridiculous. I've been here for nine months and I have not a) eaten a Vada Pav or b) been to the famous eatery Swati Snacks. Yesterday I killed to birds with one stone.
I had taken Mr Jules to tie up the coffee table deal at Moorthy's (yaaaay success, delivery in two weeks!) but we were feeling rather peckish en-route. Having spotted Swati Snacks nearby to Moorthy's warehouse, we decided to go in and sample what was on offer.
For the folks back home, Vada Pav (pronounced Wadder Pow) is one of the most famous of all Mumbai street foods. Along the same lines as Masala Dosa and Pani Puri which I previously tried at Soam. It consists of a mildy spicy potato mixture which is fashioned into a patty, lightly fried in gram flour and then placed between two well buttered halves of a bread bun with a slathering of chutney. Unlike me, Mr Jules has had Vada Pav on occasion and loves them. He describes the dish as a 'spicy chip butty'. (You can take the man out of Yorkshire....)
Being of fragile British constitution in the stomach department, I have not been brave enough to try one from the roadside, but in the sanitary surroundings of Swati Snacks, I was very happy to give it a go. And I was not to be disappointed! Delicious! Mr Jules said it was the best he has had so far. Delicate, squidgy potato mixture fragrant with curry leaves and mustard seeds, all sown up in a light fluffy bread bun. Yum.
We also had some of my favourite 'chaat' commonly served on Mumbai streets - Sev Puri. This tasty dish consists of small discs of crispy puri (tiny breads) layered with finely chopped veg - potatoes and red onions - and then topped with dahi (yoghurt), chutney and a generous sprinkling of sev (the deep fried vermicelli like you find in Bombay Mix), coriander and cucumber. It's crunchy and tangy! Seriously more-ish.
On top of that (although bursting at this point) we sampled the veg dhansak which was a simple lentil curry with pulao rice. Really good. The whole lot - including two Pepsis, came to 500 Rs. Can't wait to go back! 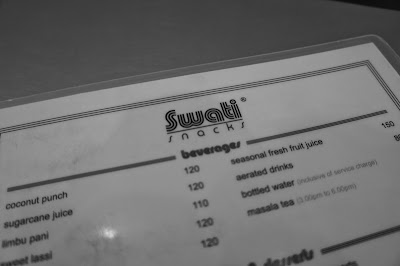 Swati Snacks
Karai Estate
Opp Bhatia Hospital
Tadeo Road, Mumbai 400007
www.swatisnacks.com
History of this Mumbai institution, taken from the Swati Snacks website:
40 years ago, Asha’s and Anand’s mother, Minakshiben, started a little fast food restaurant in Bombay; the food was cooked at home and served at the restaurant. Over the years it has grown in size and reputation but firmly remains a family run restaurant. Asha has made innovative additions to the menu, based on delicacies that have been traditionally made in homes. In 2003, under Asha’s watchful eye, Anand and his family started Swati in Ahmedabad.Today, Swati has become an institution, trusted for its commitment to quality and hygiene, dependable for consistent flavours, food that is served simply and without fuss, mouthwatering flavours that tempt you time and again.
Posted by BombayJules at 12:57