The Mumbai Dabbawalas - Dabba Dabba Do!

Yesterday 'The Ladies Wot Have Posh Cameras' travelled down to Churchgate Station in south Mumbai to observe the famous Dabbawalahs in action (Dabbawallas, Dabbawallahs, or Tiffin Wallahs).

For the readers back home, a Dabbawala is a person whose sole job it is to collect home cooked 'dabbas' - basically packed lunches - from the homes of office workers and deliver them to said office workers via different modes of transport. After the packed lunch - or tiffin - has been consumed, the Dabbawala will re-collect the empty box and take it back home to the person's residence. Each tiffin box usually contains two or three containers - mostly carrying traditional Indian foods such as rice, veg curry, chapattis and vegetables. No doubt with a fraction of the calories of a Pret-a-Manger sandwich.


Every day, about 5,000 semi-literate Dabbawalas deliver a staggering 175,000 - 200,000 tiffins to Mumbai's office workers, using a colour and code marking system to ensure faultless delivery (codings, that would apparently baffle the most advanced of cryptographers). In fact, Harvard have made a study of this incredible delivery system due to the fact that mistakes only occur at a rate of one in six million - all done without the use of IT and cellphones. Beat that Tescos! And not only has our very own Prince Charles and Richard Branson been to meet the Dabbawalas of Mumbai, but back in 2004, the President of the Tiffin Suppliers Association addressed a group of 50 management gurus on the finer points of logistics management. Further, Forbes also awarded it a six sigma performance rating! (OK I don't know what that is but it sounds impressive huh?).
There are many persons in the dabba chain between home and office - and the deliveries are made using a kind of relay system: A Dabbawala will collect around 30 lunch boxes at around 9-10am - he will then distribute these to other Dabbawalas at the train station dependent upon the final destination of the office worker. On the train journey into the city, each carrier can transport up to 40 packages on a long tray that they balance on their heads. At the main terminus at the other end (in our case, Churchgate station but also commonly Mahalaxmi or Victoria Terminus), the dabbawalas stream off the train at around 11.30 am where they re-group outside the station to organise the onward journey of the lunches. The onward journey is usually by cart, bicycle or on foot through the heavy traffic. An amazing spectacle! The journey is then reversed upon collection of the empty tiffin boxes.

Now you may well ask yourself (as I did), why one earth these office workers don't just take their own packed lunch into work - as is the norm in the rest of the world. Well having done a little bit of research on this, I can tell you the following:
Genuine, cheap and hygienic home cooked food guaranteed: For the majority of Mumbai workers, restaurants are way too expensive to be a daily solution. On the streets, numerous outside stalls sell for a few rupees different types of snacks that you have to eat standing on the pavement in the middle of the crowd and sanitary cooking conditions are not guaranteed!
Food diversity of Indian people: With the diversity of Indian eating habits, it is very difficult to answer the specific need of each employee in a same place. “Veg” and “non veg” are usually the only two options that canteens are able to give, without taking care of all the different regime between religion, castes or geographic origin. By delivering to each employee his tiffin filled with food prepared at his home, dabbawalas solve the problem.
Time shortages: Many Indian workers have to leave very early in the morning to make their long commute to work - before 7am at least. It is enough that the individual or the Indian housewife has to get up, get their breakfast ready and send the kids off to school. The Dabbawala service affords wives a couple more hours to prepare their husband's lunch - cooking it and packing it before it is picked up from their home at between 9am and 10am. Not only that, but on the extremely crowded trains of Mumbai, it means that workers can move unhindered - with both hands free to fight for precious space.
Dabbawala as postman: In the days before mobile phones, housewives could send messages to their husbands in the tiffin package. And messages could be sent back from the husband upon collection of the empty box. (Probably 'do this, do that!' rather than 'I love you'...!).
Dabbawala as status symbol: For those households who can not afford servants, having a Dabbawala deliver your lunch is seen as the first step to having staff. After all, the service is a mere few rupees a day - and is therefore a service that doesn't break the bank of ordinary workers. Especially in Mumbai where life is already so costly for middle class people. The service generally costs about 450 Rs a month (GBP 5.50 or $8) and the ingredients themselves - very little.
So lesson over, here are more pictures! 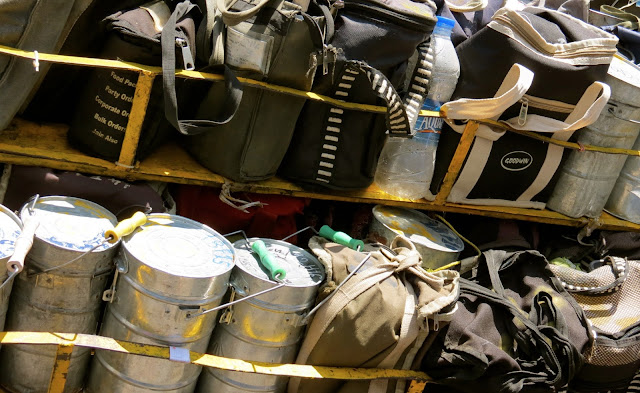 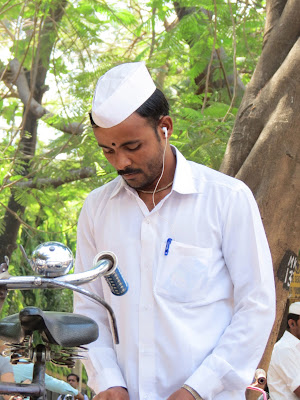 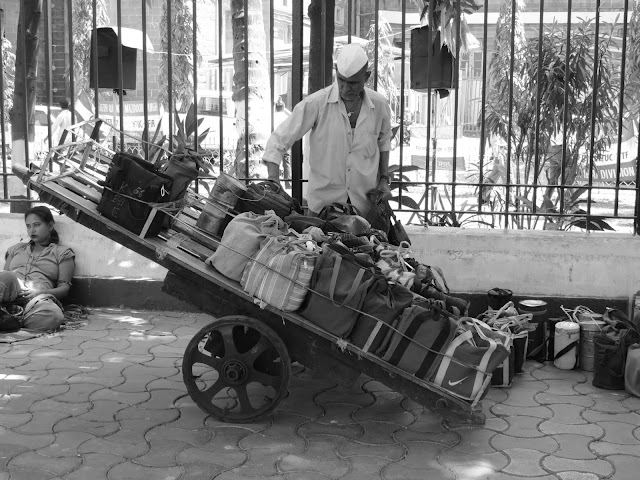 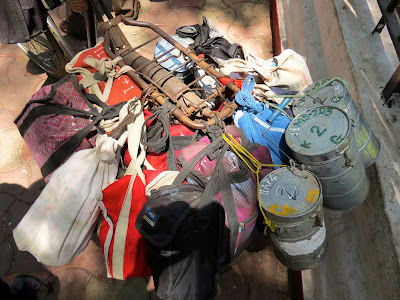 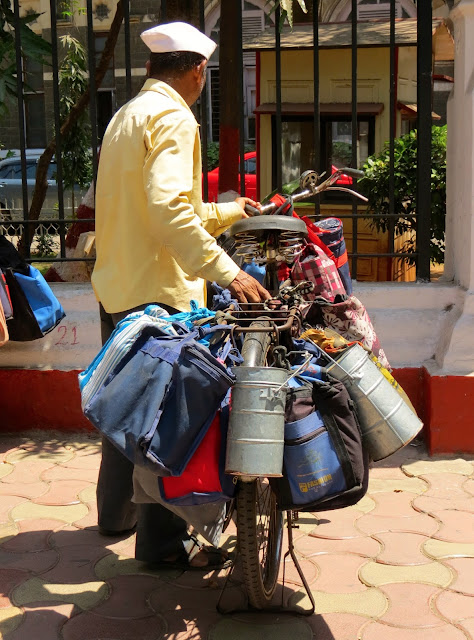 Thanks for visiting!
Useful info from: http://halshs.archives-ouvertes.fr/docs/00/03/54/97/PDF/DABBA.pdf
If you would like to see the Dabbawalas in action, be at Churchgate station by 11.30am. Stand by the train platforms and when you see them emerging from the train follow them to see where they go and redistribute the packages outside (easier than explaining which exit!)
Posted by BombayJules at 14:31