This post is for home-sick expats craving quality meat who think there is no western style butcher in Mumbai.  Or worse, for those expats who actually go all the way up to the Renaissance Hotel in Powai to buy their meat (does the head chef know about this?). Or even worse than that, for those British whom I have heard bring frozen steak on a flight all the way from the UK in their luggage and try to squeeze it past Indian Customs.

Perhaps there are many quality butchers in Mumbai, I don't know - but what I can tell you is that Joseph's Cold Storage (which I believe to be the best) is about one minute's walk away from our apartment in Pali Naka and they do great steak.  Yay. 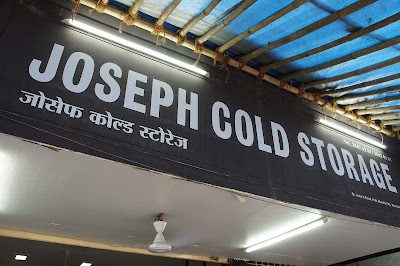 The first I heard of Joseph's was when I was stuck back in London for four months apart from Mr Jules, prior to me coming out to join him.  One day, I had a joyous text message announcing that he found a place to buy Yorkshire Pork Sausages. All was right with the world again.

Today, I went to buy steak for tonight's dinner.  It doesn't say fillet, sirloin or rump steak on the board - there is one choice available and it's called tenderloin or 'undercut'. I would say that it is closest to sirloin steak but it is has hardly any fat on it.  You buy it in whatever lumps of meat are available - usually anything over 1kg.  Today I had to buy a piece that was 1.5kgs.  And by UK standards it's so cheap....300 rupees per kilo - that's £3.50 or $5.6 per kilo!  Because there is only two of us I have them slice it up and placed in two bags so that I can freeze one of them. That means that tonight's portion of steak will cost about £1.75 for the two of us.

You can also buy lean mince, hallal chicken breasts and joints, Yorkshire pork shoulder or leg (we made a mean roast a couple of weekends ago), bacon, beef etc etc.  The full list is on the board above.  Everything is cheap by western standards and as I have found, cuts of meat are as good as anything you can get in Waitrose.  Not so great is the bacon - it is a little too salty but if you chop it up small and add it to dishes such as spaghetti and pesto, it is fine.  (Note: the bacon comes in packets and looks like ham, but it is not, you must still cook it). The sausages again are too salty and we would not recommend them for a British or American fry up (oh yes, Mr Jules was a bit disappointed in the end with his sausages).  However, they probably would be good chopped up into a pasta sauce with fennel seeds.  Also with the ground beef, the mincing is a bit too fine for say, a bolognaise sauce (it's more keema style for curries and koftas), so Mr Jules and I shipped a mincer from Amazon  to mince the undercut and it works just fine. You are all invited for lasagne!

Free range eggs are also available (bring your own box or you have to carefully carry them home in a plastic bag like we did!) - 6 for 23 rupees (27p), home-style curry sauces and pickles.  In fact I am sure if you ask the very nice owner, Anil, you can probably get pretty much anything for your home cooking requirements.

As a side note, you can buy beef and pork because this business is run by Christian folk - Anil and Sandra D'Souza - and Bandra has a long Christian heritage being settled by the Portuguese in the 1700s. You will often find Anil at the counter serving throngs of expats - I have seen French, Japanese, American, many British - as well as Indians who come far and wide to buy his quality products.

When you go to the shop on St John's road and go up to the counter you will see large numbers of staff milling about in the back.  There are four or five men at the counter taking orders and shouting them to the back (they wear the red t-shirts), there are about ten guys pulling stuff out of the fridges (blue t-shirts, yellow aprons) and then two counters with several more guys doing the chopping and weighing.  It's quite an operation - I can only guess that they are supplying the many local restaurants as well as the expat and non-vegetarian community.


Tonight we will be having steak with chips, fried onions, mushrooms and green beans.  Or perhaps I will slice it thinly and make a stroganoff with mushrooms and onions.  I will have to see what Mr Jules fancies when he comes in.....

PostScript: we had mashed potatoes and al-dente green beans with our steak.  Yum. 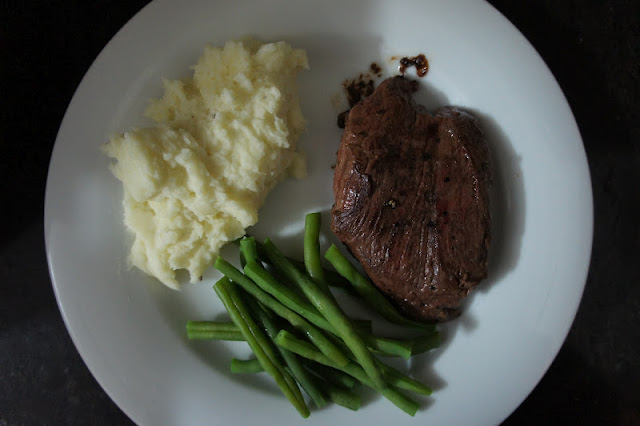