There is one thing that will not have escaped the notice of any Mumbai resident - and that is the 'Beanbag 26407383' graffiti that can be found all over the city. South to North and East to West.  You will see it on concrete walls, on the huge pipes that bring water down to the city from Powai, on flyovers and on 'wasted space'.  But mostly - you will find the graffiti on the temporary hoardings surrounding Mumbai's many new building developments. The spray painted advertisement is as unfailing as it is re-assuring.  As soon as a new building is finished and the hoarding comes down, another one is started and a new sign is made. Love or hate the graffiti, you can't deny that the salesman responsible for these ad-hoc campaigns is a marketing genius.

A few days ago, I started snapping the logo wherever I saw it as a sort of photo project. But then I got to thinking, 'who is this Beanbag 26407383'?  Is it a real person selling real beanbags?  Or is 'beanbag' actually a euphemism for something more sinister?  That's when I bravely decided to call the eponymous number in order to find out.

But first - a small part of my Beanbag photo collection...you will have to carry on reading if you want to know who Mr Beanbag is.... 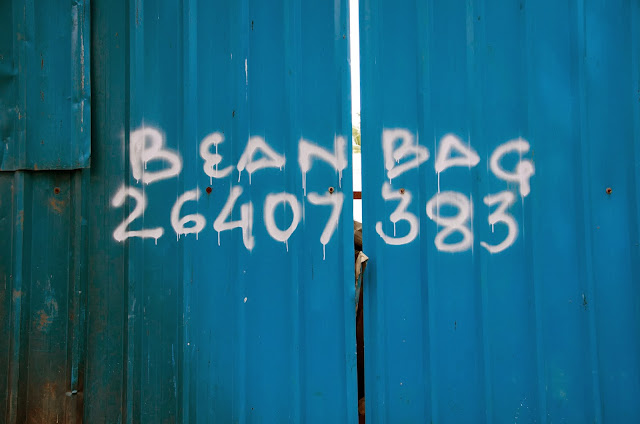 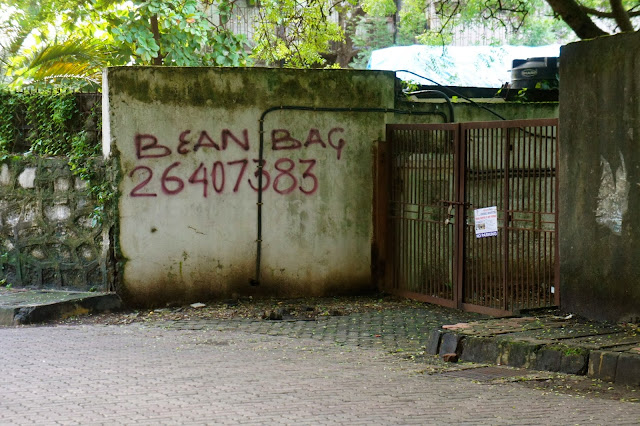 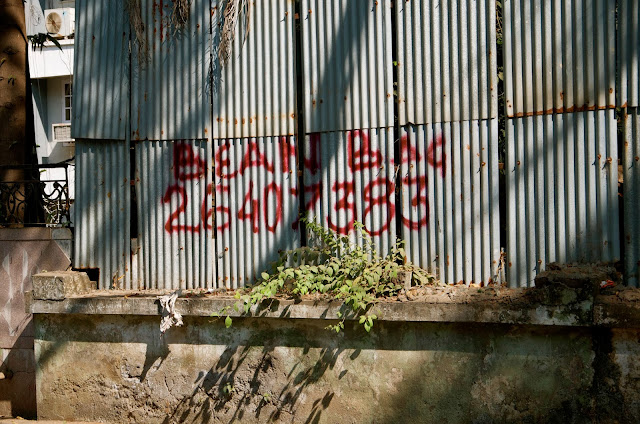 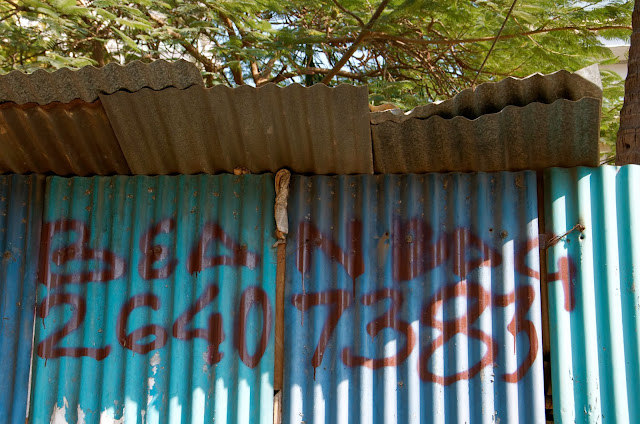 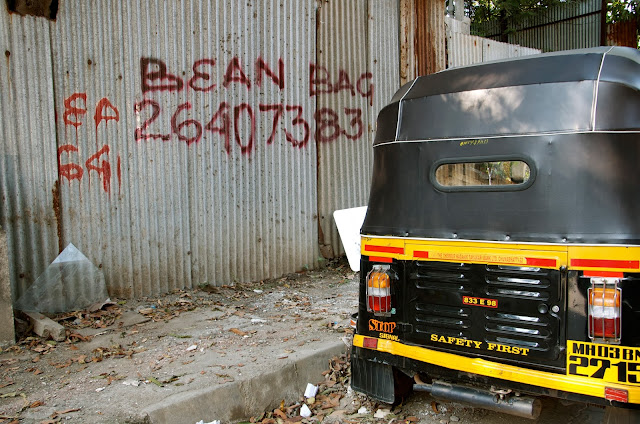 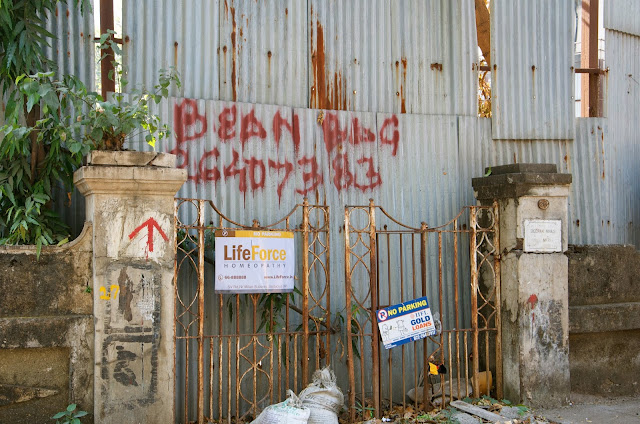 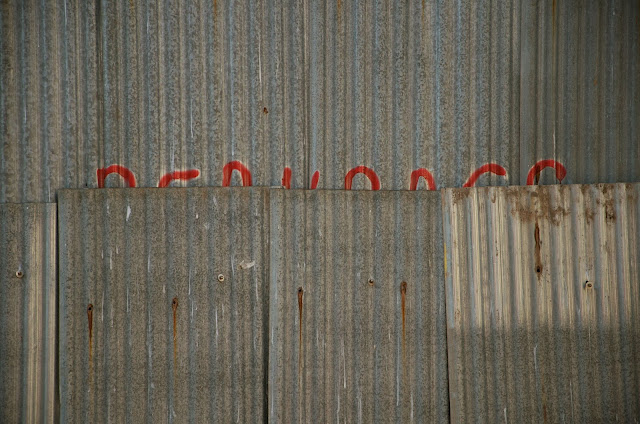 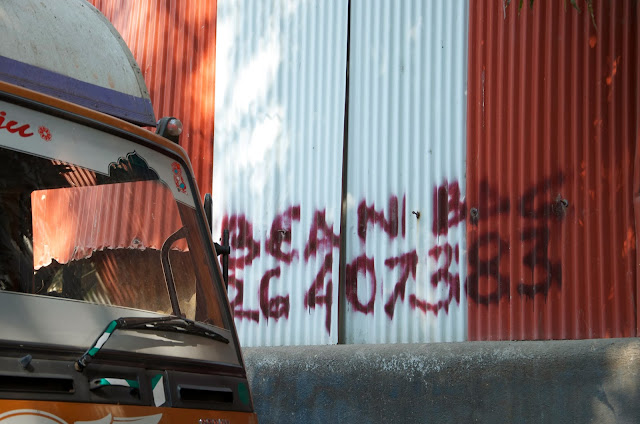 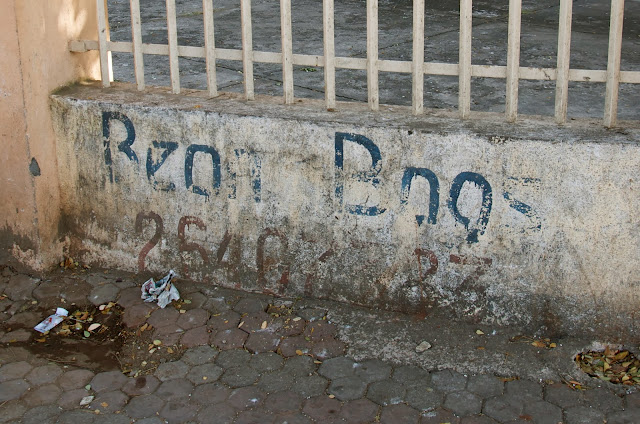 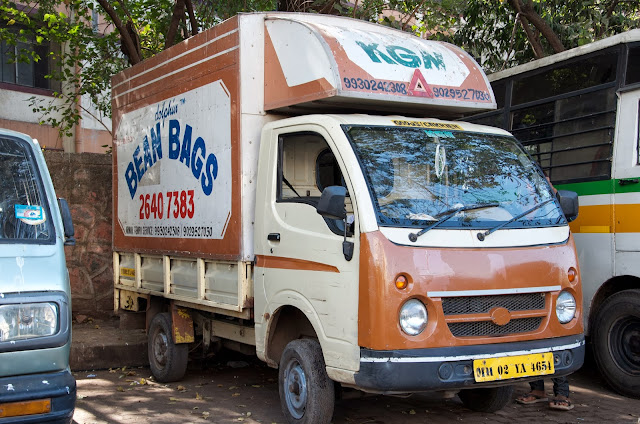 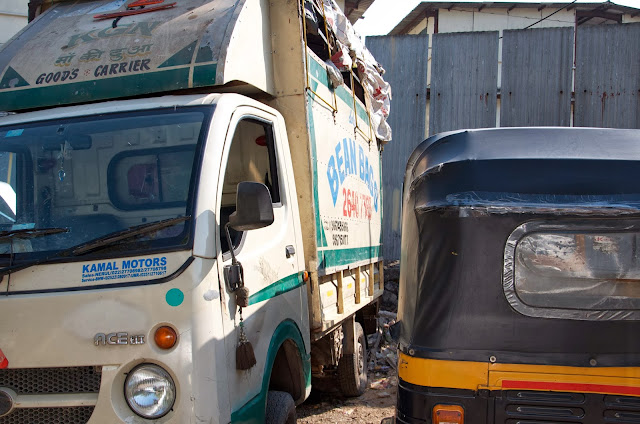 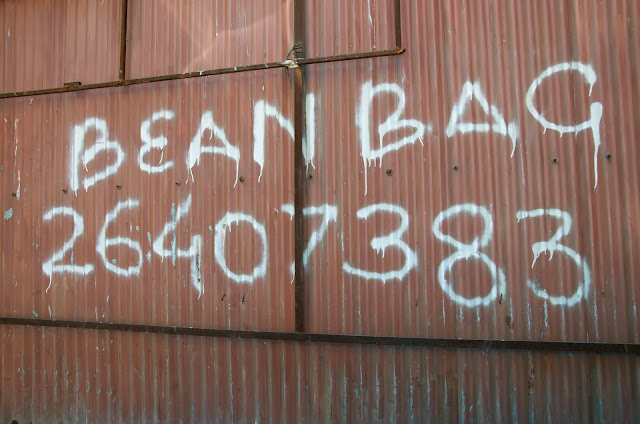 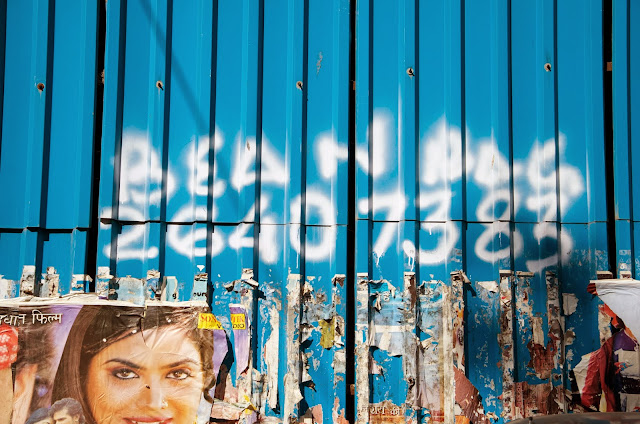 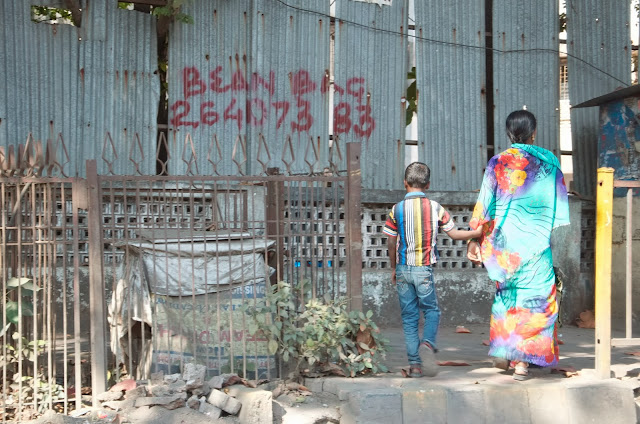 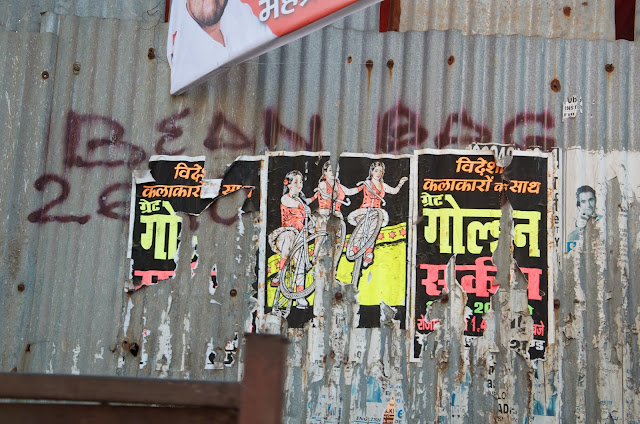 So I called 26407383 with some trepidation.  Would they speak English? Would they think I was barmy for calling up to find out who 'Mr Beanbag' was?  My driver was already wondering what on earth I was doing making him stop every two minutes so that I could take photos of the signs.  I even had to explain to him what a beanbag was! After all, most Indian people sit on the floor if they are not sitting on a chair or divan.

I was very pleasantly surprised when the phone was answered by an efficient young lady.  I explained what I was trying to achieve and she put me straight through to 'Mr Beanbag' himself! (I am starting to make him sound like a character out of a Quentin Tarantino film).  Again I explained to 'Mr Beanbag', that I was trying to 'find the face' behind the graffiti - and let my readers know whether this was a true business rather than just a Banksy-type art concept.  That's when he told me to come and meet him at his head office in Goregaon West - this morning.

As I have now discovered, there are actually three 'Mr Beanbags' - Farooq Ansari, his son Wahib Ansari (whom I did not meet) and their partner Sahil Shetty. Between them, they run Beanbagwala and Dolphin Beanbags (to give the businesses their full names). YES, it really is a business selling BEANBAGS! Climbing the stairs to their first floor shop, I was amazed to find that Sahil and Farooq looked more like two fashion designers than manufacturers of comfy seating. Farooq was dressed in what looked like Italian tailoring - with tapered chinos, checked shirt, blazer and trendy glasses. Extremely fashionable and confident.  Sahil - sporting blue trousers, t-shirt and button down cardigan - cuts an equally dashing figure. 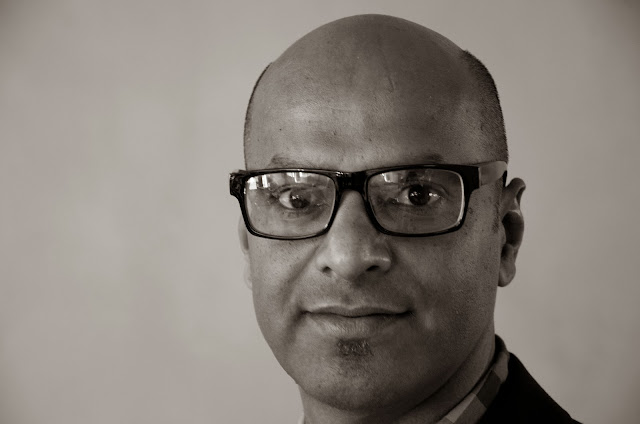 I was so taken with their appearance, I nearly forgot to ask them about the beanbags!

So we got talking about the business and Sahil gave me a mini-tour of their premises - which is heaped to the ceiling with products waiting to go out to customers.  He showed me their range of designs and sizes, all in a multitude of colours and fabrics. The customer can ask for exactly what they want.  I was particularly taken by the denim model - appealing to a more western aesthetic.  Around the back, I was introduced to a few of the workers - who were busy sewing up the outer casings before filling them with polystyrene beads.

This is a business that has been going for 30 years.  Started in 1983 by Farooq, it has steadily grown into a very successful beanbag empire. I asked Sahil - who was recently brought on to help develop the business - if the graffiti advertisements play a large part in their success.  He seemed reticent to answer but from the 60 calls a week they get for bespoke orders, I am guessing that their marketing concept works pretty well.

So there you are - the Mr Beanbags in the flesh!  I can highly recommend you give these very nice chaps a call if you are looking for a seating solution.  The beanbags are particularly great for kids - and if you ask, they can make you a pet bed too.  And there is more to their product range - like the bean-filled chairs and even an armchair, and the double sofa that can be flattened into a bed.  What's more, they are about to launch a range of wooden furniture.  Beanbag prices range between Rs 2,000 and 15,000 depending on size and design (the upper end is for real leather). 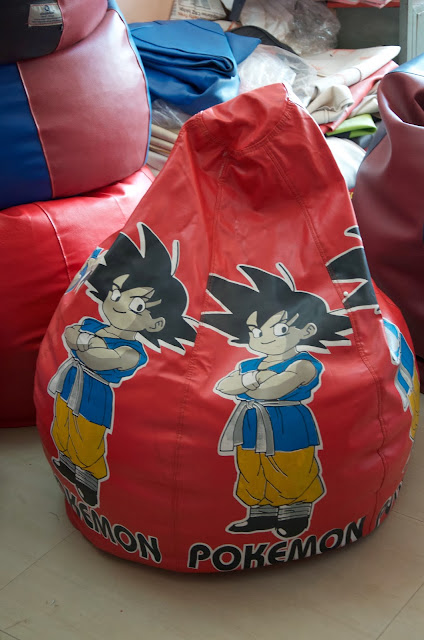 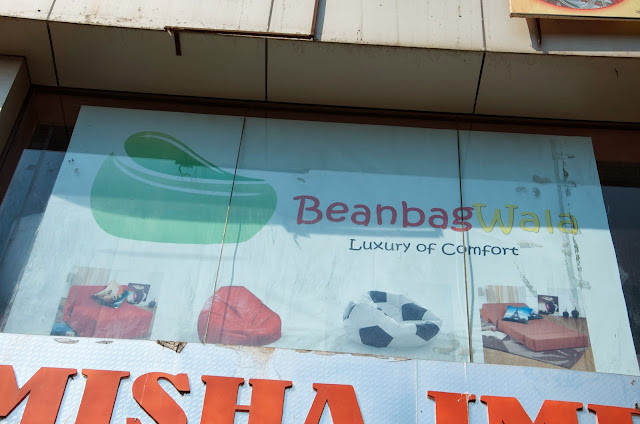 POST SCRIPT:
This blog went unexpectedly viral due to the Facebook posting that was shared 1,880 times (as at 01/01/14) and seen by nearly 400,000 people.  The article also made it on to the Midday news portal and the Redbull.com website! Whoever thought that 'Who is Beanbag?' would turn out to be such a big mystery?!

New comments are not allowed.