Mr Jules and I have just got back from a very lovely few days on Lake Ashtamudi in Kerala. Never have I been anywhere in India where I have felt so relaxed and so far removed from frenetic Mumbai. Even on Lake Vembanad - the best known Keralan lake, the waterways are constantly teeming with houseboats ferrying tourists around.  But here on Lake Ashtamudi time seemed to stretch easily into infinity, with only a few houseboats and fishing boats traversing this huge lake every day.

We stayed at The Raviz which was also one of the best hotel experiences we have had in India.  We booked a special offer due to the hotel recently being taken over and upgraded by the ITC group. Our big 'Premium' room (with a huge bathroom with jacuzzi, separate shower and loo; office and seating area) was situated on the top floor - complete with a balcony overlooking the lake. The sunset was visible every evening over the still waters.  The food was pretty good - each buffet breakfast, lunch or dinner availed a variety of cuisines and room service and a la carte selections were all well cooked. The only thing that we found frustrating was the ridiculously slow drinks service - although after five or six complaints about not receiving drinks within a satisfactory amount of time, the service seemed to dramatically improve by the end of our stay...never keep an Englishman from his beer!

Relaxation time was particularly precious to Mr Jules on this trip. So it was good that the biggest executive decision to be made would be where to while away the hours reading. Should we sit on our own rather elegant balcony? Or perhaps choose to sink into one of the many hammocks to be found in the garden? Or maybe we would be more comfortable on one of the loungers on the Raviz's stationery houseboat? Perhaps we'd be better off on one of the daybeds on the colonial style verandah? So many choices, so little time!

On Boxing Day, we hired a houseboat from a private company and meandered across Lake Ashtamudi and its tributaries, admiring the birdlife and spying into the every day lives of dwellers living at the edges of the water. Mesmerising sermons, hymns and chanting were broadcast from lakeside Hindu temples and Catholic churches - hurling voices and music across the water wherever you went and forever in earshot.

The boat was huge - and I thought it was a mistake when we stepped on to it from the Jetty.  There was a seating area big enough for forty people - in the middle of which was a three piece suite that looked like it had just been removed from a Harrow council house.  All that was missing was a 46 inch television.  However, the boat was manned by three very nice chaps, including a very capable chef who served us a delightful traditional Keralan lunch (enough to feed the missing 38 people!). We traversed the lake from 11am to 5pm, stopping only for lunch.  A highly recommended pastime if you are visiting the backwaters - and of course you can stay overnight if you wish - our houseboat had two double bedrooms with en-suite bathrooms!

On the last afternoon of our holiday we made an effort to do something other than lounge on a hammock by taking a mini day trip to see the sights of nearby Kollam. These don't number many but we decided to forgo the opportunity of visiting the cashew nut and coir making factories and instead got our driver to take us to the port.  No stranger to the sights and sounds of Indian fishing docks and fishing villages, I enjoyed taking photos of the local men bringing in the catch of the day and repairing their nets.  Mr Jules attracted quite a lot of attention  being relatively tall, blonde and blue eyed amidst a sea of tiny local people hunched over crates of fish. And just like at Sassoon Docks, it was the (considerably friendlier) women who are left to clean and sell bucket loads of small fish to local housewives.

Then after a mind-blowingly hot prawn curry at a wonderful local restaurant (Nani Hotel), we visited a Keralan handicrafts shop (selling mostly tat but I did purchase a really useful bell on a long carved wooden chain) and the market area. I came away unusually empty handed from the shopping trip as all I could see were the usual Indian domestic requisites such as plastic buckets and stainless steel kitchenware.

After this we went on to Thangassery Lighthouse - one of the most interesting landmarks in the area. Of course when Mr Jules said he wanted to 'see' the Lighthouse, I thought he would just want to stand on the outside and look up at it.  But no, I was wrong. Having an unusual burst of energy, he wanted (along with a band of about 20 school children that had just arrived), to climb all the way up so that he could admire the 360 degree view from the top (but what he really meant by this, was to see if any rare birds could be spotted from the top!). Being a sufferer of vertigo, I really was not keen on this idea, especially when I saw that the stairs were a mere foot wide and only deep enough to accommodate the shoe-size of a nine year old. Not only that, but as you peered up the centre, you could see knuckles clenching on to the weedy, spiralling railing all the way to the top.

Having been made to feel guilty about walking off our lunch by Mr Jules, I eventually agreed to stagger up the stairs with him.  It actually didn't take as long as I thought although there were a few very uncomfortable moments when we had to pass equally overweight people on their way down on the very narrow stairs. But as we got higher, nausea was rising within me very quickly.  When we finally made it to the top, the only thing that was keeping us from stepping over the side was a two foot walkway and another weedy looking railing. In the manner of a person trying to avoid a suicide attempt, I put my back up to the wall and sidestepped around the very top of the lighthouse.  But then as more and more people piled on to the precipice (with the usual crap Indian health and safety) I decided it was time to make a rapid exit.  Whilst Mr Jules enjoyed a few sightings of bee-eaters and Brahminy kites, I departed back down the tiny stairs, clinging as best as I could to the sweaty stone wall whilst trying to let the coach load of school children pass me by.

Glad to be back on terra firma, we decided that would be the end to our Kollam sightseeing and went back to the hotel for tea.  The next day, feeling regret that we couldn't stay a little longer, we took a packed breakfast for our 7.30am journey to the airport and on to Mumbai.

It really was a wonderful Christmas week in Kerala.  I hope you all had a great time too. A Happy New Year and see you in 2014! 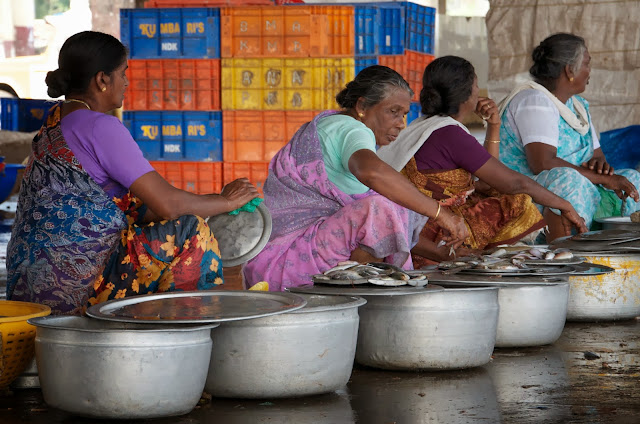 More Kerala photos will soon appear on the BombayJules Facebook page...please do visit!

Email ThisBlogThis!Share to TwitterShare to FacebookShare to Pinterest
Labels: Travel