This is what our driver cries, every time we pass by a roadside waterfall - because inevitably there will be fully or semi-clothed Indians sitting under it, relishing the clean cold stream of water crashing on to their heads.

We don't obviously pass by roadside waterfalls on an average day in Mumbai - but we have seen them when driving through the Western Ghats - either to Matheran, on our recent drive down to Goa (crazy) or near to Karnala Bird Sanctuary.  I have also seen torrents of water coming down from the mountains in Ernakulum National Park in Kerala - where we saw more fully clothed groups of Indians enjoying these 'Shower Baths' (Funnily enough, our driver there also cried 'Shower Bath!' as we drove by).

Of course, we find it hilarious and I always wind down the window to take a photo.  But it does leave me wondering - how on earth do they get dry afterwards and do they catch flu? Do they bring a towel and a spare set of clothes in the knowledge that they will be doing this? These waterfalls tend to be at their best at the height of the monsoon season, when there isn't exactly enough sun to dry out naturally!

I have also seen local Indians on Juhu and Goan beaches taking to the sea fully clothed.  It is still not 'normal' in Indian society to reveal too much flesh in public - and your average working class mother is certainly not going to carry around a bikini and towel around with her, in the hope of a dip in the sea. Those kind of leisurely pastimes are out of the reach of most people in India.  And although most middle classes will now have a shower at home - having a bathtub certainly is not the norm.  It it therefore not at all surprising that when people come across cool, refreshing downpours of water in a clean and green environment, they're going to make the most of it, even if they are fully clothed!

Perhaps bathing in the sea or under a waterfall has religious connotations - as they do in Varanasi or at the Kumbh Mela where millions of people come to immerse themselves in the holy Ganges.  Ironically, considering that it is one of the most polluted rivers in the world - it is deemed pure and purifying to bathe in the Ganges with the hope that a lifetime of sins will be washed away.

From the photos below, it looks like it is more to do with having fun...and why not? 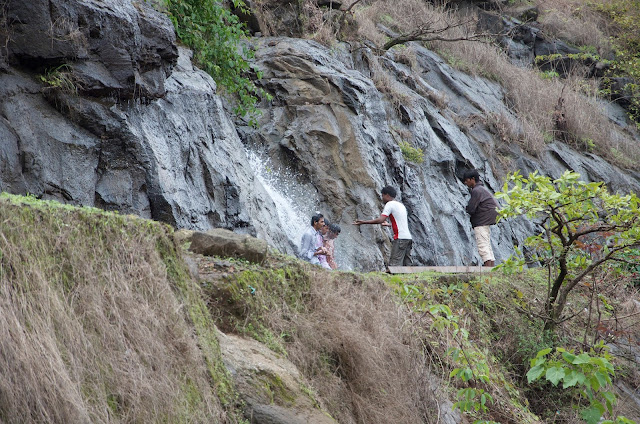 Email ThisBlogThis!Share to TwitterShare to FacebookShare to Pinterest
Labels: Only in India