Why I Had to Buy an Iron

Look at the scene below. How could this possibly relate to buying an iron you may ask yourselves!?  I will tell you: 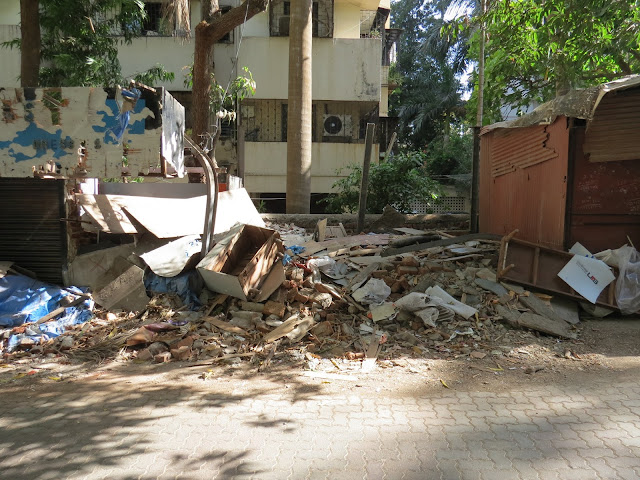 The destruction pictured above is in the lane that leads up to the gates of our apartment building. When I walked past and first saw this mess - around two months ago, I asked our driver what on earth had happened. It seemed so shocking.

Well this is apparently what happens when the BMC (Brihanmumbai Municipal Corporation) decide that your building/home/chawl/pavement dwelling should not be there.  They come down with their bulldozer and they mow it down.  Or they get men with hatchets to do a hatchet job.  Prior to being reduced to rubble without warning, this unit was a tiny office belonging to a hard working man.  But apparently he did not have the appropriate permissions to run his business there.  And not only did they take down his premises, but the BMC's men caused so much damage to the barber's shop next door in doing so, that they too had to close down their business. The poor barber had nothing to do with this other than being a neighbour - he was running a 'legitimate' operation.

Two months later and this mess has still not been cleared up.  I am not sure who is going to sort it out - perhaps someone is trying to get the right permissions to resurrect a shop or office there.  No doubt resolving whatever issues there are, will take not days or weeks, but many months or even years.  In the meantime, I wish I could get a giant dustpan and brush and sweep up this eyesore.

So why did I have to buy an iron?  Well, two units to the right of this scene - was the shop/dwelling belonging to our 'Ironing Man'.  The guy that I mentioned in one of my first blogs who used to press all of Mr Jules's shirts for 10 rupees a throw and then deliver them back to our apartment.  And I say shop/dwelling, as the Ironing Man used to sleep during the hottest hours of the day on a little bed tucked away at the back of his 10ft x 8ft cubicle, and then iron away the neighbourhood's accumulation of shirts, kurtas and bedlinen in the cooler hours.

Following the bulldozing of the 'illegal' office premises and the subsequent damage to the barber's shop next door, the barber made an offer to the Ironing Man to take over his unit.  The Ironing Man took up the offer, closed his ironing business and went back to his village in Uttar Pradesh!  What a loss!

Without the Ironing Man (and naturally my refusal to do ironing), Reetha gladly took up the mantle as part of her duties.  Actually she was very pleased about being able to use one of her many skills - she always seemed a bit put out that we gave our ironing to the man at the bottom of the drive.  So at least one person has been made happy by this unhappy situation.

And as we did not even have an iron for 'emergency situations' (i.e. creased underpants and napkins), I bought her the best one I could find from Croma and a sturdy ironing board from a shop on Pali Market. Now Reetha presses a few items of clothing and bedlinen every day - and whilst the ironing is not quite up to the industrial standard of the Ironing Man, I suppose I can't really complain! ;)