Golden Triangle Part 6 : It All Ends In Varanasi

After not having a wink of sleep on the overnight train from Agra, we were thankfully picked up by a taxi at the train station and brought back to our hotel, the Ramada JHV Varanasi.  This accommodation was rather a cop out on my part - when I was sorting out our Golden Triangle Tour, all the smaller hotels had been booked up due to it being Diwali - and rather than book a 'dive', I decided to go for 5 Star, characterless and corporate hotel (with very annoying 'Musak' constantly played in the restaurant and lift!).  I don't think La Visitante was too impressed by my choice!

Anyway that aside, it was actually nice to sink into a comfy bed with squidgy pillows after the previous evening's experience, for a quick morning nap.

Later on, and having no energy whatsoever to fend off rip-off tour guides and rickshaw drivers, we decided to use the hotel's in-house travel service to reserve spots on the evening and early morning boat tours on the very sacred Ganges.  We paid over the odds, but were past caring by this point.

The sunset boat ride on the ghats is all about the Aarti ceremony on Dashashwamedh Ghat.  This is a kind of puja, where candles are lit and offered to deities, songs are sung and bells are rung.  The one we witnessed (which occurs nightly in Varanasi) goes on for a very long time.  A very long time.
﻿


But firstly the boatman and our guide (a crazy crazy guy who I am sure was high on something) took us for a slow row up the Ganges. From the river, everything is on view as you work your way along.  Life and Death. 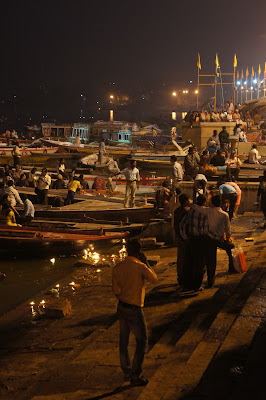 Our guide tells us that people who have done bad things in their lives, can come to Varanasi and basically pay to have their souls cleansed.  What a cheat I think to myself.

We see some old men swathed in orange cloth sitting on the steps on one of the Ghats and our guide tells us that these men smoke hash all day - but they are allowed to because they are "Holy Men" (Yogis  I guess). Maybe our boat guide is also a 'Holy Man'?  People pay these men for holy consultations in the belief that they will be relieved of all their wrong doings.  To me they look like hobos - just because they have long white beards, smoke hash and wear orange cloth, doesn't make them holy.  What a con.

There are people bathing in the waters and throwing the Ganges over themselves. I am trying not to think about hepatitis. The banks are filled with rubbish - and everyone knows where Varanasi raw sewage ends up.  The guide asks us to light our little candles, say a prayer to the setting sun then let the candles float off on the water.  Then he tells us to scoop up some water to press to our hearts and foreheads.  Oh my god ...no way!  I make a pretence at this but he sees that my hands are dry and tells me to go again.  I do actually make a prayer at this point, but not for the purpose that he thinks!


Our rower - a little old man chewing paan like there is no tomorrow rows us back to Harishchandra Ghat and as we approach, the orange wisps of flames grow bigger.  I know what is coming up for Harishchandra Ghat is where Hindus burn their dead.  In some cases the bodies are carried from miles and miles away.  In other cases, people come to Varanasi in order to die so that their ashes can be immediately thrown into the Ganges.  I am not sure how I am feeling about witnessing 'live' cremations (plural as there are about five or six happening at any one time).  La Visitante and I both later agreed that it seemed pretty disrespectful for boat loads of tourists to be sitting on the river witnessing this, 'just for the experience'.  There is even a boat load of Thai tourists who are standing up and taking photos of the spectacle!  This makes me sick to the stomach.

Then an even more dreaded moment occurs.  The boatman turns around to us and remarks what nice pashminas we are wearing (to protect us against the early evening chill of the river).  Oh no, I so know what is going to happen next!  "My wife, she is a fashion designer, she sells wery, wery nice scarves"...."Oh really?" we say, trying to look disinterested.  Even in Varanasi, so concerned with life, death and do-gooding, you can not escape the pashmina salesman! We are being tempted with more scarves right here on the water!!! So after getting off the boat at the end of our tour (after the long Aarti ceremony), we are walked back to where the car is parked via his PINK house.  In the PINK house, we are asked to sit down in a room where the walls are stacked to the rafters with silk items.  Scarves, bedcovers, sarees - the usual stuff (all that is missing is the silk weaving demonstration). We try to object, saying we are too tired after not sleeping the previous night.  But we are made to sit down and have a cup of chai.  Then we are shown a photo album (deja vu?) with pictures of the day when GOLDIE HAWN visited his PINK house to buy sarees and silk scarves.  If it is good enough for GOLDIE HAWN, surely it is good enough for two British ladies?  To be honest we couldn't give a stuff and despite virtually the whole of his family showing up (including his very overweight and scantily clad brother!), we did manage to eventually walk out - but only on the premise that we would return after the sunrise boat ride the next day.

This blog will be far too long if I describe the sunrise boat ride in full.  It was pretty similar to the previous evening's jaunt (and with the same boatman and high-on-life guide) but with the difference that the Ganges is bathed in an eerie early morning light as hundreds of people gather on the Ghats to wash themselves in the murky water.  Bodies were also still being cremated at this time in the morning - around 6am. There is heavy traffic as La Visitante and I together with hundreds of other tourists are rowed up and down the river banks - it's pretty much like a day out at the Cowes Regatta.  Even more so as La Visitante rolled up her sleeves to take over from the boatman...and rowed several hundred metres up the Sacred Ganges!  Most impressive! 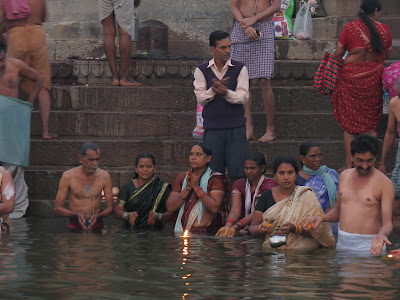 On the way back from the sunrise tour, we managed to dodge the PINK house by walking very quickly with our heads down. I think the guide got the message and did not press us to enter his house.

Already at 7am the streets were full - the city teeming with maimed humans and maimed dogs.  We couldn't wait to get out (Varanasi Very Nasty La Visitante called it).

Later that day, we visit Sarnath,  a lovely and relatively peaceful (and very sacred) Buddhist temple site with a huge stupa.  We see Buddhist monks wearing an array of colourful robes, taking photos on their mobile phones and carrying laptop bags - yet another weird scenario.

﻿
That was it for Varanasi.  And the end of our Golden Triangle Tour!  The next day we flew back to Mumbai.

Thanks for keeping up with the saga!