In between trying to finish blogs from my recent travels with La Visitante, I am posting a restaurant review I wrote for the December issue of Chalo Magazine....will be back in full soon!

I don’t think I have ever been to a restaurant within a few days of it opening.  In London you would have to book weeks in advance to gain access to a new eatery (well one of repute anyway).  So it was with some excitement that we were able to reserve a Saturday night table at the hottest new show in town, Serafina.
Serafina (3rd Floor, Palladium, Phoenix Mills) is an outpost of the New York Italian restaurant where according to NYMag.com – “it is possible to sit upstairs at the 79th Street location, and pretend you're on a breezy patio in Italy as you munch on delectable thin-crust pizzas, stellar pastas, and inventive salads”.  The fact that the Mumbai outpost is based in a shopping mall (even such an upscale one) is therefore maybe a little disappointing. In retrospect ,  Serafina definitely lacks the authentic New York vibe of say, Café Zoe.  And once inside, the interior is as far away from a ‘breezy patio’ in Italy as it is possible to get. It would be better described as a homogenous chain restaurant with little character and little warmth.  Never mind, perhaps their pastas would indeed be ‘stellar’. 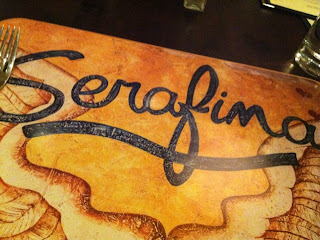 Upon arrival at 8.15pm the place was already starting to fill up. We were seated against a faux frescoed wall - certainly Michelangelo has not been a big artistic influence in these parts.  Our waiter introduced himself as Pradeep (or “Pradeepi” as I tried to call him in my best and most hilarious Italian accent). Blank looks all around. 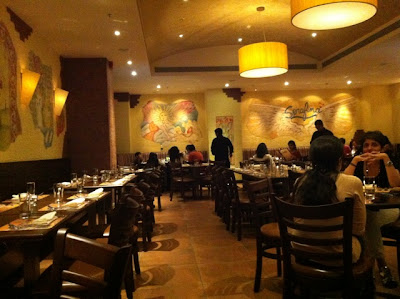 That night we were dining out with two Indian friends who are extremely well versed in the Mumbai restaurant scene and I was hoping to impress them by bringing them to Serafina.  Firstly my husband chose some wine for us ladies – a nice bottle of Antinori Santa Cristina (Sangiovese).  It would have been even nicer if it had been served at the correct temperature bearing in mind the price tag was 3,500 Rs plus tax (and that was at the lower end of the price range!).  Still, it was a treat after my usual nightly dose of Sula and it soon warmed up.
For starters there was quite a bit of umming and aahing over what to choose. Everything sounded so wonderful.  It was the dishes with imported ingredients that immediately jumped to the fore.  We chose the “Prosciutto & Bufaline”, the deep fried calamari and the “Tartare di Sofia” – finely chopped ceviche style tuna on a bed of cucumber served with small rounds of finely sliced toasted bread.  When I sampled the buffalo mozzarella, it was definitely an “Under the Tuscan Sun” moment.   Creamy, meltingly soft and 100% bellissimo! Being starved of decent quality European ingredients had taken its toll on me more than I realised.  And the tuna was so light, so delicate and so authentic!  I loved it.   Except I was a little bit annoyed when the waiter snatched the plate from under our noses, when there was still a smattering of the ambrosia on it. I nearly hollered after him (desperate or what!) but then remembered where I was and who I was with.   The basket of calamari (how very Beefeater Steakhouse), which was actually enough for two or three people to share, was deemed ‘OK’ by our guests.  The many small rings of squid - I would have preferred choice large ones - tasted fresh but the breadcrumbs were slightly lacklustre and not quite crispy enough.  I think I would have favoured a light tempura style batter over breadcrumbs, but I am not sure that would have been authentically Italian.


﻿
We had mixed feelings about the main courses.  My husband chose the “Farfalle al Limoncino”, whilst I went for the lobster stuffed ravioli in a lobster bisque sauce and our friends chose a “Ravioli al Porcini” and a parma ham “Di Fabio” pizza.  I felt that the pastas were all served inappropriately – dished up on to large plates with the sauce splodged around the edges instead of neatly contained in proper pasta bowls.  Points definitely deducted for presentation.  However, the creamy sauce on my husband’s farfalle was light and subtly lemony (another “Tuscan Sun” moment), and the porcini ravioli was really rather good. The pizza was suitably thin and crusty with a good layering of the salty parma ham on the top.  And I am pleased to say that despite my initial reservations about presentation, the pasta was cooked perfectly al-dente and appropriately coated in sauce - instead of the overcooked, swimming-in-watery-liquid dishes that are normally served in Mumbai’s Italian restaurants.  Our guests, who were not long back from a holiday in Italy, said that they had almost been transported back there by the food.  So that was good.

But hang on - I did not mention my lobster ravioli!  Oh my gosh, I am sorry to say it was most unimpressive!  The pasta was cooked well but I do not believe that a fresh (or indeed frozen) lobster had been anywhere near the filling or sauce.  It literally tasted of cardboard but with a hint of some unidentifiable spice.  Our Indian guest remarked that it had been ‘Indianised’….well I may disagree with that as it did not blow my head off with chilli and it was also very bland by Indian standards.  But something was certainly amiss with it.  Disappointed, I left three quarters of the ravioli – thank goodness we were eating with Indians who are more than happy to share their own food! (PS. (Apologies for the lack of photos of the main courses by the way, I got a bit caught up and forgot to take any!).

By the time dessert was offered we were quite full but decided we could still squeeze something in (isn’t that always the case?). So we went for the supposedly famed tiramisu and four spoons.  Well I’ve eaten a lot of tiramisu in my 41 years so consider myself quite an expert.  When it arrived, I was slightly disappointed to see that pouring cream had been lathered all over the top.  I immediately knew that this would smack of UHT…and I (think I) was right.  However the sponge fingers used to make the dessert had been properly soaked in the correct amount of coffee/rum mixture and nicely layered with mascarpone.  I wouldn’t say it was the best tiramisu I have had in my life but it wasn’t bad.  Next time I will ask for ‘no cream’.

We didn’t bother with coffees and asked for the bill.  And the bill was probably one of the most expensive ones we had ever paid for in our short time in Mumbai.  Four starters, four mains (all with a good amount of imported ingredients), one dessert, a bottle of the aforementioned read wine, three Kingfishers and two imported ‘Birra Morrettis’ came in at a rather scary 14,800 Rs including service charge and taxes. Granted – 50% of the bill came down to alcohol consumption.  If there is two of you going for lunch and you stick to sharing one calamari and a couple of simple pasta dishes and a bottle of water, it would be possible to eat for under 2,500 Rs including service and taxes for the two of you.  The service was very good (especially our waiter ‘Pradeepi’) – we didn’t have the usual five or six staff hovering intrusively around our table and neither did we have to chase for attention.

By the time we left at 10.30 it was really quite buzzing with friends and families dining out in groups – I did not see many children.  As we walked out, our Indian guests excitedly remarked that Shobhaa De had been sat on the next table to us the whole time we were there. Unfortunately I wouldn’t have known who she was to recognise her!  But such is the pull of a new upmarket restaurant in Mumbai.

All in all the Serafina dining experience was nice but not spectacular considering the price. For that kind of money in Mumbai, you should be expecting plusher (or at least ‘trendier’) surroundings and top notch service. However, if you are lacking vital nutrients in your diet (I speak of European ingredients!) I recommend going just for the buffalo mozzarella, prosciutto and tuna tartare.  All divine!
Serafina
Level 3, Palladium,
Phoenix Mills,
Senapati Bapat Marg, Lower Parel
Tel: 022 40237711 or 022 40237712
Posted by BombayJules at 22:00

Email ThisBlogThis!Share to TwitterShare to FacebookShare to Pinterest
Labels: Eat, Mumbai Eating Out