Yesterday I had another fabulous lunch at Britannia - undoubtedly the most famous and well loved restaurant in Mumbai.  It may be where all the tourists head (much like Leopold's) but it doesn't matter - because the Parsi food served here doesn't get any better.
﻿﻿﻿﻿

﻿
If you are British and go to Britannia you are in for an extra special treat.  The 91 year old owner - Boman Kohinoor -  is a devout Anglophile and worshipper of Her Majesty Queen Elizabeth II. He can detect a Britisher at 20 paces, will come up to your table whilst your order is being taken to show you his collection of QE memorabilia and news cuttings. You will even find a cardboard cut-out of the Duke and Duchess of Cambridge (aka Wills and Kate) stood precariously on the balcony.  Definitely an eccentric, he does go on a bit but it is hard to resist the old man's charm.  Or perhaps he is just the best PR agent in the world, I don't know.

﻿
More important is the food.  Britannia is particularly famous for its Chicken Berry Pilau (Pulav).  I have eaten a replica of this at Dishoom (a "Bombay Cafe") in London and it didn't come anywhere close.  The berries - barberries, which are a bit like a cross between pomegranate and cranberries are especially imported from Iran.  You can't get them anywhere else, and especially not in England. Being with a Britannia first timer, we had to order this most famous of dishes and it did not let us down. Light fluffy rice mingled with chicken breast and chicken mince balls, a smattering of delicately spiced gravy topped off with the little red jewels.  Yum.

Also very impressive is the Britannia's less famous Sali Boti - (mutton in gravy topped with fried matchstick potatoes) which we didn't actually order but got given anyway.  We mopped this up with our chapatis in no time - delicious, rich and meaty but not too spicy.

Alongside the berry pilau we had a lentil dhansak which nicely balanced out the relative dryness of the rice.  Everything was up to the usual standard and our newcomer went away satisfied and impressed.  And the service was excellent, our waiter patiently attending us whilst Mr Kohinoor regaled us with his stories of brushes with British Royalty. (Poor him, he must have heard these stories a million times!)

﻿
The bill for three wasn't bad value either considering these guys don't need to fight for customers - the three dishes above with chapatis and three lime sodas came in at just over 1,000 rupees (£11.50/$17).  We couldn't manage dessert but I hear that the caramel custard is the thing to try. 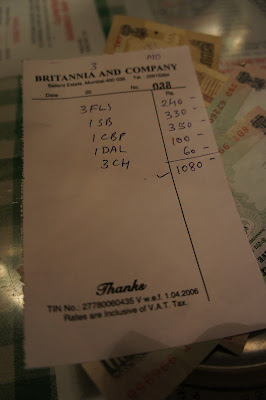 The restaurant itself is full of charm - slightly rough around the edges with peeling paint on the ceilings but has the feeling of a proper old school Bombay Caff.  We went at about 3pm on a Tuesday afternoon when it was relatively empty - so we got the full attention of the owner! An absolute-must-experience.  Here are some more photos: 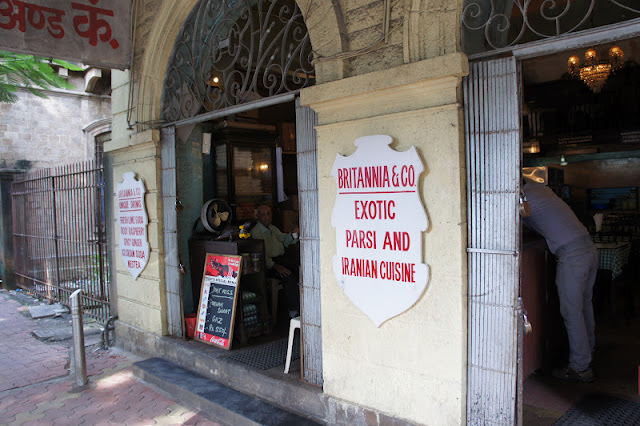 Britannia & Co,
1 Sprott Rd.,
Ballard Estate,
near Fort;
tel +91 (0) 22 22615264
Open 12.00 - 3.30 Only (closed Sundays)
NOTE: CASH ONLY!
An explanation of 'Parsi' and 'Parsi Cuisine'
According to the Encyclopedia Britannica, 'Parsi', also spelled 'Parsee', are members of a group of followers in India of the Iranian prophet Zoroaster. Parsi literally means: 'Of the Ethnicity of Pars-- also known as Fars', a province located in Southern Iran. The Parsis, whose name means 'Persians,' are descended from Persian Zoroastrians who emigrated to India to avoid religious persecution by the Muslims. They live chiefly in Bombay and in a few towns and villages mostly to the north of Bombay, but also at Karachi (Pakistan) and Bangalore (Karnataka, India). Although they are not, strictly speaking, a caste, since they are not Hindus, they form a well-defined community.
When they fled from Iran, around 1,300 years ago (exact date unknown), they settled on the coast of Gujarat. Parsi food is therefore a rich blend of Persian and Gujarati culinary styles. It has the Indian flavor in vegetarian food and when it comes to the non-vegetarian dishes it derives taste from the Persia.

Parsee recipes are known for there bold flavors, use of dry fruits and being not very spicy. Chicken, mutton, eggs and fish are generally used in dishes. Parsis are very fond of eating egg dishes. They use Indian spices, ginger, garlic and onion but the dishes are not very spicy. Rice is generally eaten with a variety of curries. Some of the famous Parsi recipes are chicken farcha. Patra ni machhi, dhansak, saas ni machhi, akuri, pora and tamota ni suss chaval. In desserts sev, ravol faluda and kulfi are popularly known. Bhakhra, batasa, khaman na lavda and dar ni pori are snacks which are light and tasty. (http://www.indianrelish.com/main/recipe/parsi/)
Posted by BombayJules at 15:40