A ruined visit to the Prince of Wales Museum

Having been ill with ear ache for the whole of the previous week, I suggested to Mr Jules that visiting a museum would be a nice, calming and cultured way to spend a Saturday afternoon.  So it was with this in mind that we set off in the car to visit the Prince of Wales Museum in South Mumbai.  Or Chhatrapati Shivaji Maharaj Vastu Sangrahalaya as it is more catchily known as these days.

﻿﻿
We just about got in OK, despite battling dozens of Indians at the entrance who evidently did not know what the word "queue" meant (why aren't we used to this by now?). Before longish, we were viewing the museum's showcase of archaeology, art and artefacts, decorative arts, stone sculptures, and its Chinese and Japanese collections.  How cultured, how relaxing! There is also an extensive Natural History section with all manner of stuffed animals native to India, including a fish and bird section:


Of more interest to me was the collection of Decorative Art objects in jade, wood, ivory, metal and textiles, described as 'magnificent' by the museum curators.  I have to say, they weren't a patch on the displays at the Victoria & Albert Museum back home in London, but they weren't bad.  The selection of art originating from all parts of India was also interesting - some of it gaudy, some of it naive, some intricate, some very very beautiful.

As is always the case, Mr Jules and I never seem to be able to go anywhere without some sort of drama. Today, it happened to be schoolkids.  Hundreds (maybe thousands!) of schoolkids. Schoolkids emerging out of every crevice of of the building, marching through every room, filling every stairwell, sitting on every seat.  Every corner we turned they were there.  And then some of the school girls started to bet each other that they could speak to us.  So then they started shouting 'NAMASTE!!!' (welcome) every time they saw us (which was every two minutes), stopping to put their hands together and then asking for me to photograph them.  The noise these schoolchildren were making was riotous, disturbing my nice peaceful day and hurting my already overwhelmed eardrum. We tried to dodge them by going in the opposite direction or going to another part of the museum but there were so many of them it was impossible.  In the end we just gave up and fled.  We will go back another day when it's quieter! (why aren't schoolkids at home on Saturdays?) 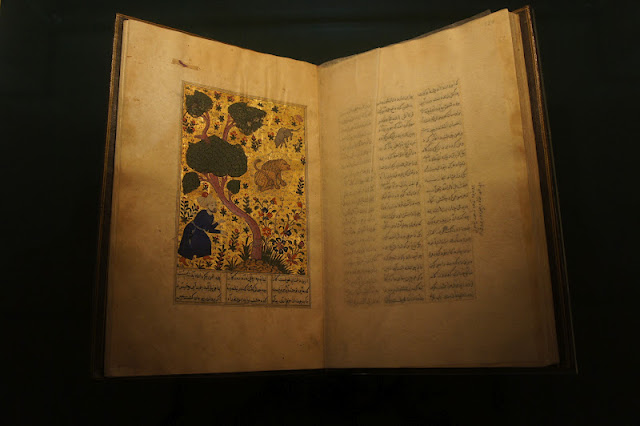 This is a very important book - the Panchatantra. - an ancient Indian inter-related collection of animal fables in verse and prose. The original Sanskrit work, which some scholars believe was composed in the 3rd century BCE, is attributed to Vishnu Sharma. It is based on stories told from one generation to the next, including "animal fables that are as old as we are able to imagine". It is the most frequently translated book in India.
﻿
﻿