The Amazing Flamingos of Mumbai

Whenever we choose to go do something cultural (the definition of 'cultural' being anything that doesn't involve shopping) we always seem to end up in a huge melee.  Either because it so happens to be a festival that day, or it is a national holiday that we did not know about - or conversely there is a bund and we can't get out at all.  Like the weekend Mr Jules and I chose to visit the Taj Mahal during Eid, when the authorities opened up the place to the whole public free of charge.  We fought with hundreds of thousands of people to get through the gates and had to heavily compete to find vantage points from which to take our Lady Di photos. Today was no exception.

We had heard some time ago about the migratory flamingos that visit Thane Creek every year but had waited for the 'right' time to go and check them out.  These pink long legged wonders visit between January and May and are attracted by what would be considered poor living conditions to humans - the alkaline nature of the mudflats caused by sewerage seeping out from the city.  Nice.

Anyway, getting back to the story - today was the day we chose to do our bit of flamingo spotting.  We dutifully checked on low and high tides and concluded that 4pm would be a good time to turn up - when the mudflats would be uncovered by the tide going out and the birds would be able to come in closer to land. We made the journey by car to Sewri Fort on the lower eastern side of the city - the best place to see the spectacle.  However just before we turned in to Sewri Fort we noticed a man standing on the corner holding a camera with a huge lens.  Then we saw a coach load of people ahead of us just as we were turning in.  And then we seemed to be behind a whole trail of other cars.  I thought it was a bit weird as this is an area that would normally be very quiet.

As we drove on a bit further, we seemed to be in an organised car park and it was only then that we saw the signs....."FLAMINGO FESTIVAL... by the Bombay Natural History Society"  Aaaaaagh bloody typical!!  The one day we (carefully) choose to come and look at the flamingos is the day the BNHS decide to hold their Flamingo Festival!  There were hundreds of people, wielding big cameras and binoculars and making a racket (OK, a bit like us then).

So our peaceful outing to do a bit of solitary bird spotting was going to be a bun fight for the best vantage point again. Oh well.

However, it was nice to see lots of children being dragged out by their parents in order to see the spectacle of thousands of flamingos treading the flats - and we were happy to share around our binoculars.  As well as these stunning birds, we saw other species including a Black Headed Ibis, Redshank, Bar-tailed Godwit, and a Western Reef Egret (info supplied by Mr Jules!).  And I did manage to get one or two photos although I was finding it hard to keep my arms steady with all these people around me.

The flamingos will be in the creek until April or May when they then fly on to their breeding grounds in Kutch in Northern India.  It really is an amazing thing to see in the middle of Mumbai - to be that close to nature in this city is usually very hard to come by.

A few pictures, thanks for stopping by! 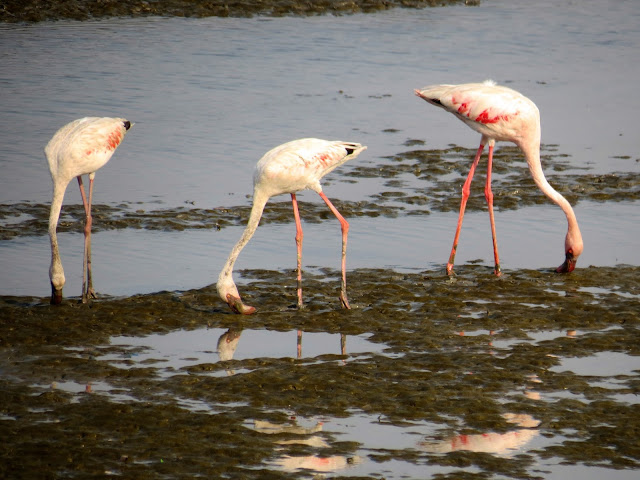 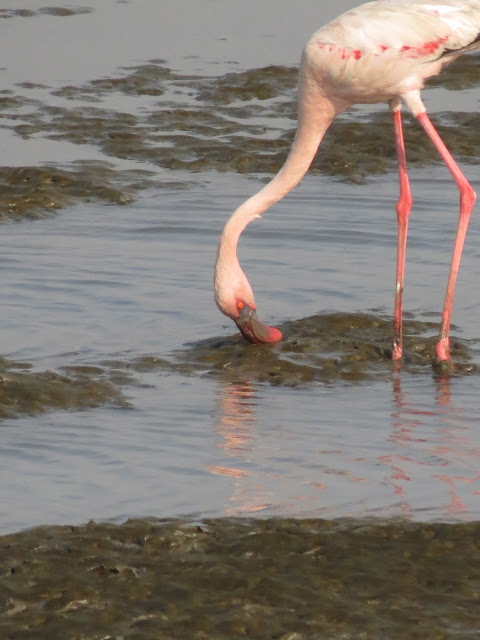