It doesn't matter where you are in India, you will notice various common themes; ones that are usually amusing, awe-inspiring or downright insane.  For example, the men who sleep anywhere, anytime at the drop of a hat.  Or the people hanging off the roofs of buses, out of the sides of trains and rickshaws.  Or the handcart men, pulling enormous loads through the manic traffic of India's big cities.  It doesn't take long to realise that such common themes emanate from the everyday hardship and difficulties that so many endure.

Another quirk that is hard to miss - is the balancing of heavy, sometimes awkward objects on the head whilst walking along in a nonchalant fashion.  I am always impressed by this method of goods transportation and have realised - by going through my photo archive - that I am also slightly obsessed by it.

The ancient art of carrying-on-the-head is common practice anywhere in the developing world - so much so, that it has its own entry in Wikipedia.  It is after all, a free-of-charge and usually more efficient way of transporting smaller (or ridiculously large) loads.

I have noticed that it is quite often the woman who will use this method to carry things; men do too - but the women are so much better at it (ie they don't need to use their hands to steady the load).  According to the Wikipedia entry, there is nothing harmful about carrying vast loads on your head - up to 20% of one's bodyweight can be carried without additional energy or exertion being required.  I am sure the same can not be applied to anyone who is obese - but then again, you never see obese people walking around with baskets on their heads.  In fact, I am sure we could all lose weight if we started balancing our groceries and books on our heads whilst taking a morning stroll.

Actually, balancing books on my head was something I actually had to do at school in order to improve my posture (or deportment as we called it). Every young lady at my school was taught the importance of carrying oneself properly and sitting with a rigid back - and balancing books on your head without letting them fall was a good way to practice.  Of course, it all went to pot later in life after hunching at a computer all day long - but never mind!

Seeing women in colourful saris carrying objects on their head in Mumbai seems incongruous against the city backdrop - sometimes they weave in and out of the traffic or walk in a remarkably straight line upon appalling pavements.  But of course this is borne out of the itinerant nature of the city - poor folk arrive from rural areas every day looking for work in the City - folk who are used to walking from village to village, carrying their wares on their head.

Actually, it was something that I experienced recently that got me writing about head-carrying in the first place. When Mr Jules and I were about to leave Matheran a couple of weekends ago - we decided to walk from our hotel - the Verandah in the Forest - back to the car park (instead of riding back on horseback). Because it was rather too long a walk to carry our own luggage, we took up the offer of having someone carry it for us (this is India after all!)

We were expecting a strapping young lad to turn up to collect our bags - we would have been happy with that.  But instead, an ancient and extremely spindly woman pitched up, wearing nothing on her feet.  She must have been at least 70 years old.  Without a word or a glance, she strapped our two bags together with some waterproof material, then hitched them up on to her head and strode off.  I can tell you that Mr Jules and I were mortified! I looked at one of the hotel staff and was about to complain when he cut in and said "it's OK, it's her job, she's OK" ( - in fact, we couldn't believe that he also called her a 'Coolie'!!) I wanted to argue with him but grandma was already in the distance, picking her way barefoot up the stony incline, with a perfectly straight back and without looking back to see where we were.

We had to accept that this was her job. her way of life and her way of earning for her family. The old lady certainly was not complaining - so neither should we.  We followed on behind rather meekly and ashamedly for the duration. Subconsciously, I think we were even trying to remain a good distance behind so that we would not be associated with allowing such an old person to do our dirty work.

When we stopped off on the high street to buy some of Matheran's famous chikki (sweets), I couldn't tell if she was grateful for the rest or not.  I think we probably broke her rhythm.  And despite the fact that we both wore sturdy boots and it was drizzling - the old woman kept speedily ahead of us and did not falter once with our baggage. She even managed to balance the bags on her head whilst a) eventually deciding to slip on her flip-flops and b) carrying a plastic bag containing an umbrella - in case WE should need it!  Wow! (Don't worry...we tipped her handsomely). 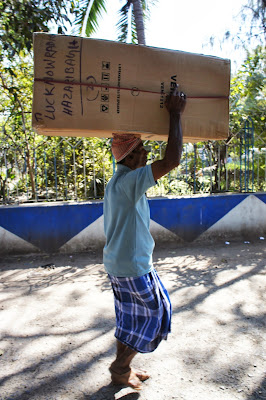 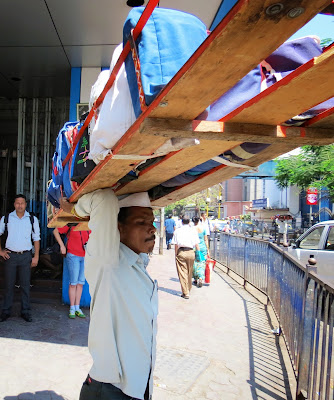