You say tamatar, I say tomato...

Ever since we got here, we've had problems being understood by Indians.  The expression 'lost in translation' doesn't come remotely near what we've experienced.  Hands up - we haven't exactly made a massive effort (or even a miniature effort) to learn the lingo, so perhaps we only have ourselves to blame.

And you may think I am referring to communications with speakers of Hindi, but I am actually talking about conversing with English speaking Indians - because Indian English is really like a whole other language.  And I guess that's why it's called Hinglish.

The differing pronunciations; the em-PHAS-is on the wrong syll-AB-les; the rolled Rs...the ability to somehow roll Hs; the speed with which the language is spoken; and of course the infamous head-wobble (first time mentioned on this blog!)  If I was to take you through all of the differences between Queen's English and Indian English, we'd be here all day.

To give you an example: not long after I arrived in India, Mr Jules ordered a curry takeaway for us from our beloved Caravan Serai.  After asking for his usual Chicken Dopiaza, my usual Chicken Malai Kebab and some Daal Tadka (and not without some difficulty thus far), he then tried to ask for two rotis - flatbreads that are eaten with almost every Indian meal.  To you and me the word 'roti' is very straightforward - not exactly a tongue-twister.  However:

MR JULES: "Please can I have two Rooortis" (in his best Yorkshire accent - always sure to throw them off)

OPERATOR: "Sorry sir, I am not understanding you?"

OPERATOR: "Sorry sir, what was that?"

MR JULES: "I WOULD LIKE TWO RO-TI!!" (Big shouting going on)

OPERATOR: "I am wery wery sorry sir, I am still not understanding you"

OPERATOR: "Yes sir, your order is on its vay"

(Of course, we ended up with two rotis anyway!)

It's pretty much the same every time we order a takeaway over the phone.  It takes a good ten minutes to complete the ordering process.  And that's just for the food.  It takes another painful ten minutes to go through our address details!

You see, the way he should have pronounced 'roti'...is rrrrrrr-O-ti - with a rrrrrrolled R, the emphasis on the O, ending with an inflected 'ti'.  Indian pronunciation is like a workout for the tongue.  And if you don't get it right - no one is going to easily understand you, especially if they are less well educated.

So I have partially wised up to this with the help of a friend, who once came over to our flat and later ordered a takeaway - her treat. She told me that the secret to successful ordering, is to use your best Indian accent. Now it might sound like you are taking the mickey - and no-one wants to offend anyone - but I have tried it and it WORKS!  And if you can do the head-wobble it helps even more (even on the phone!).  So in the event of not being able to speak Hindi, I now try and pronounce things with an Indian accent along with a bit of a head-wobble.  With this approach, I have found a degree of success in communicating with rickshaw and taxi drivers, market-stallholders and waiters etc.  Much to the bemusement of Mr Jules of course. 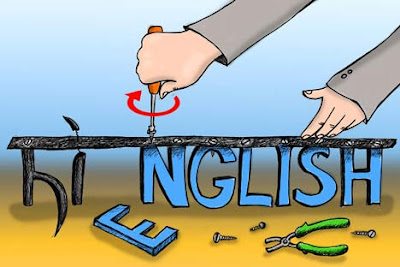 Matters are further complicated by the different languages that are spoken within India - of which there are several hundred mother tongues.  In Mumbai, we most commonly come across Hindi (the 'official' language of India), Marathi (Maharashtra), Gujurati, Konkani (Goa/Kerala), Tamil and Bengali.  All of these speakers will have their own distinct method of English pronunciation. I could go into a whole long etymological explanation and linguistic history of India, but I don't do blogs that long.

To cut a long story short, just when you think you've got it right with a Hindi speaker, a person with another mother tongue may still not have a clue what you're trying to say.  The word 'sev' for example (of the dish 'sev' puri) is pronounced SHEW by some, SEW by others, and SAVE or SHAVE by a minority.  What's more, Ds are often interchangeable with Rs (Tadka would be Tarka in England) and as with the German language, Vs are interchangeable with Ws.  Its wery wery confusing. And those two examples are only the tip of the iceberg!

I think we will have to accept that we are mostly bound to get it wrong, but at the same time we should try harder with our Hinglish. Of course what we really should be doing, is booking ourselves into Hindi lessons....

You say batata, I say potato...
You say tamatar, I say tomato...

Let's (not) call the whole thing off!
Posted by BombayJules at 14:38