My Clash with the Great Outdoors (Karnala Bird Sanctuary)

Don't get excited Father-In-Law, we didn't see anything!

On Saturday, in an attempt to get out of the city and see something other than moldy buildings, broken pavements and the great unwashed we decided - with two of Mr Jules's work colleagues - to take the one hour drive to Karnala Bird Sanctuary.  I say one hour, but if you add the one wrong turning taking us on to the Mumbai-Pune Highway with no ability to turn back, the static traffic going out of Navi Mumbai, and the twenty minute pee-stop, this actually takes you to a three hour drive.  Fabulous.

Karnala is described as a densely forested Bird Sanctuary, "a pleasant surprise away from Mumbai's concrete jungle". Barely 4.8 sq km, it is supposedly home to over 150 resident bird species and about 37 types of avian migrants.  Mr Jules, clutching his "Birds of Southern India" book and powerful binoculars thought he was in for a real treat (paying me back for the hours he has had to spend in Good Earth studying satin trimmed cushions).  However, it wasn't really to be.

After we had finally arrived at Karnala (all four of us in bad moods) we entered the car park only to be greeted by several red faced Rhesus Macaques . Monkeys climbing on the cars, monkeys clutching and licking at foil plates and monkeys eyeing up our bags in the hope of being flung something tasty.  Personally I find monkeys a bit creepy (even if they do have fancy Latin names)but I suppose they can be quite amusing. 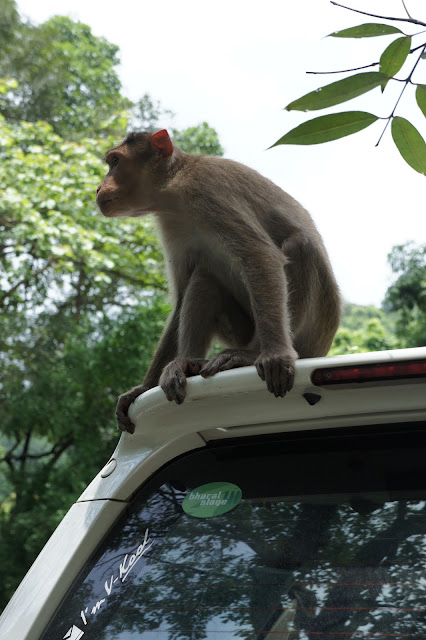 We packed our driver Karthik off with a previously purchased Costa Coffee paneer wrap and some banana cake for his lunch (I should have been a Girl Guide) before getting ourselves ready to enter the great forest - with sensible shoes and umbrellas in case of a monsoon rainstorm.  Karthik studied us bemusedly as we went off - going for a walk??? Only mad dogs and English men....

After paying our 20 rupees each to get in (there was a queue of four - being us), but as per usual Indian style, it still managed to take 20 minutes to achieve access rights.  When we thought we were safely in, we were then taken aside by the 'bag' police (literally) who searched our bags for plastic bottles (potentially lethal litter), counted them up and then made us pay a deposit for each of them. This took another 20 minutes to process once we had signed a declaration in a visitor's book and obtained the necessary receipts for our deposits.  Typical.  Especially if you consider that there are no catering facilities whatsoever within the site and if you don't want to die of dehydration you have no option but to take ample fluids in with you.

Finally, we got on to the right path and headed off on the 'Haryali Trail'.  I could hear lots of tweeting but could not see anything of interest (or should I say, of interest to my husband).  Excitedly, Mr Jules and his colleagues soon came upon a bird hide.  Wow this must be a proper professional bird watching paradise if it has a hide!  I managed to clamber up the ladder on to the viewing platform.  PERFECT, some clever hide-architect has designed the building so that it has a low slung pitched roof!!! So you could not actually see anything above eye-level.  We had to strain underneath the eaves to get a look at anything with the binoculars.  Not that there was anything to see.  Except this:  a phallic shaped mound! Ha! 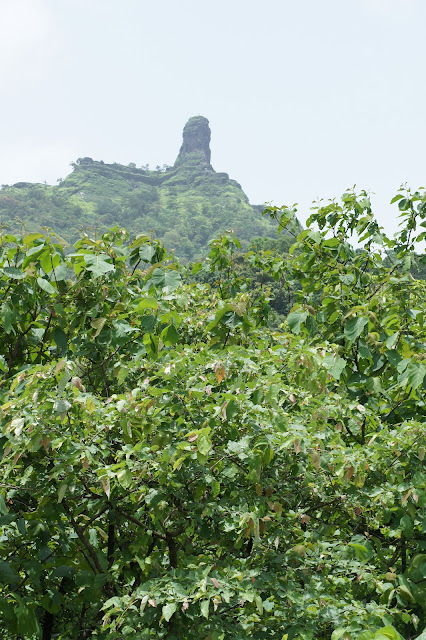 Worth a laugh surely?   Apparently this mound - Karnala Fort or the 'Funnel Hill' as it is called, stands 475 metres high. there are two gateways with one at the foot and the other at the top of the rock-hewn steps leading to a dual gateway with a chamber in between. Mr Jules and I kept wondering what in fact was the point of having a fort here when there clearly was nothing worth defending (unless they were ancient ornithologists, creating a safe haven for the peregrine falcons, king vultures and crested serpent eagles that apparently exist at that height).  After not seeing anything except for a few butterflies we got back on to Haryali trail to find out what was next.

Well next was nothing really - the big blue round thing depicted on the map that we thought would be a gleaming lake, inhabited by throngs of unusual wading birds, was in fact a stagnant pond teaming with mosquitos and horrible flies (which we only found out after sitting there for 10 minutes and getting bitten to death by seemingly invisible insects...watch this space for a malaria update in a few weeks!)

Worse for me, the people with me wanted to attempt to get up to the fort or as near as damn it (6kms away!). In the searing humidity and up a soggy, rocky, red-soiled path way (clearly, the Romans have not been through here), I knew I would not be able to make it.  So after about 20 metres, I complained about my unsuitable footwear and said I would wait at the bottom until they got back.  Mr Jules was very gallant and offered to wait with me.  Wow, I am such a wimp (anyone reading this, NO, I did not have my Miu Mius on, I had trainers with no grip!...cheeky)

Thankfully, the colleagues did come back after 20 minutes having decided not to go all the way up to the top - probably out of sympathy for me but also because it was probably a fairly unpleasant walk in the very sweaty conditions.  Plus they also did not see any of these so called amazing and rare birds, just a yellow crab and some huge ants.  Pah! Oh yes and we did see some more of those naughty monkeys, one of which bounced on a tree branch to make stuff fall on top of my head.  Haha funny...not.

As we were now more than a little disappointed that no paradise flycatchers, no shamas, magpie robins or malabar whistling thrushes had turned up for our visit, we trundled off back to the car (this time I was walking very quickly) Thankfully, THANKFULLY to make the trip worthwhile, we caught sight of some Black-Faced Langurs. They were quite cool I have to admit. Some were in the trees grooming each other, some were chasing each other over and under the branches, and one was giving me the death stare.


Then we drove back home.  And it only took fours hours through the Mumbai traffic.  All in all, a wonderful day out with seven hours spent cramped on the back seat of the car and 2.5 hours sweating myself to death.  Next time I will stick to shopping. Here are some more images from the day: