The Verandah in the Forest - Agatha Christie Style

Last weekend Mr Jules and I escaped the city by visiting Matheran - a hill station in the Western Ghats, about two and a half hours drive out of Mumbai.  In India, many hill stations were built by British colonialists as refuges from the oppressive summer heat of the city - most being between 1,000 and 3,000 metres above sea level.  Of course we chose not to visit Matheran when the immense heat of April and May was affecting us - but instead when it was pouring with monsoon rain.  But no matter!

Getting through Vashi and Navi Mumbai to reach the outer limits of the city was easy.  We were soon driving through lush green paddy fields on a road that was relatively well tarmacked (for India). Then there was the steep hill climb up to Matheran itself - a first time experience for our driver who hadn't even been in the countryside before.

When you reach Matheran, you have to leave your car behind and walk the rest of the way to your final destination.  Or take a horse.  Because there was a bit of a hill involved and at least another 60 minutes to get to our hotel - Neemrana's Verandah in the Forest - we opted for the latter.  This is certainly no walk in the park if you are not used to riding.  Thankfully they provide you with steps to get up on to the horse but then you have to clutch on with your thighs and hold onto the saddle with your fingernails as the horse progresses up a long, stony incline.  Coming in both directions are well laden mule trains carrying supplies up and down the hill - you have to hope that their galloping motion doesn't make your horse want to bolt.

By the way, the reason you can't go all the way by car is because Matheran is an 'eco-sensitive' region where vehicles are not allowed.  So you can at least be sure of very clean air in central Matheran!

After a butt-clenching journey, we finally arrived at our hotel.  A large 19th century colonial house with a huge verandah (as the name would suggest).  It was dingy and seemingly empty except for one lady sat out front, reading a book.  Eventually someone scuttled out from the back and made us sign in and hand over our passports (even though we'd only come 90kms to get here).  Then a kitchen boy brought out a couple of welcome drinks. We were shown to our room - 'Petit' - with high up windows and a lovely big colonial style bed.  What sun that there had been during our horse ride was already beginning to fade.

As we started to unpack, the rain began to come down in earnest.  Monsoon rains tend to start with a a pitter patter for a few seconds, and then before you know it - an earth drenching downpour is upon you.  We sat on the bed in the failing light, and it was like someone had placed us at the bottom of Niagara Falls - with the water crashing against the corrugated iron of the roof above us.  We wanted to go out for a walk, but after an hour of waiting there was no improvement in the weather.  There was nothing for it - we'd have to have a cup of tea.

In actual fact, even though tea and coffee is supplied in the room, afternoon tea is served free of charge at the hotel (consisting of a tea of your choice and a few biscuits).  At first we were alone on the verandah. But as we huddled up with our cups of Earl Grey, a few more people began to emerge from their rooms.  There was the young Intellectual Couple with their laptops (on holiday ??), the Tall Couple (presumably Punjabis), the KD Lang Lookalike with her mother (not her lover as I first thought!), and the Well Balanced Family consisting of mum, dad, son an daughter.

The light was very dim by now and the electricity weak - the lights were flickering on and off... on and off - sometimes going out altogether. Just like in the movies, when something bad is about to happen. We all looked warily around at each other, trying not to raise our voices to an audible level (also very unusual in India).

The rain completely failed to abate, so we managed to string out tea for over an hour.  The mosquitos buzzed around our ankles and made a meal out of us. Then it was almost time for our dinner.

Amusingly, we were each told that 'dinner would be served in the dining room at 8.30 on the dot' by one of the hotel staff. I was surprised he wasn't wearing a butler's outfit and carrying a gong.

We later went through to the colonial style dining room with a long dining table (capable of seating 14 people) at which all us guests would have to sit around. On the table were three large silver candelabra which would provide the only light to eat by.  As we sat down, I could hear the dull sound of thunder in the distance as the rain continued to crash down.  With all the atmosphere of a murder-mystery weekend, I imagined that any one of the party could have been slain in their rooms whilst we sat here - had their screams been masked by the sound of the thunder?  Perhaps we would all be picked off one by one, until someone would eventually clonk me over the head with one of the silver candlesticks.

Thankfully, all the other guests arrived at dinner unharmed and with all limbs intact.  We were served a set 'Continental Style' four course meal consisting of a rather good garlicky-oniony soup, followed by a crispy pea fritter and a rather strange main course comprising pasta, cheesy potato, chicken in mushroom sauce and a spinachy thing. Fabulously, dessert was an excellent apple crumble with English style custard.

Dinner was a very muted affair - but nobody left the table and didn't come back,  there were no distant screams or gunshots.  There were no cries from foxes or owls. And I awoke unscathed from my sleep the next morning...of course! 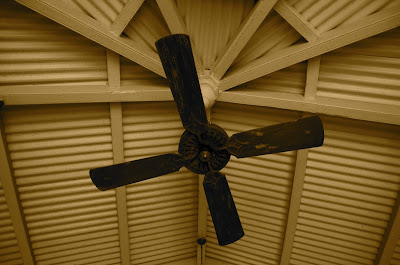 In my next blog, I will post pictures of Matheran - from when we did eventually get out for a walk!

Email ThisBlogThis!Share to TwitterShare to FacebookShare to Pinterest
Labels: Neemrana, See, Travel, Verandah In the Forest