I don't know whether it is because of the monsoon, but my mind has been turning to the subject of food rather a lot as of late. It is hard to get out and about and explore the city during such heavy rain. Perhaps that is why I am more inclined to stay in with a recipe book and plan dinner - or go and learn to cook Indian food first, then plan dinner.
I had been trying to find a class for quite a while. I had emailed a couple of schools purporting to teach Indian cooking - but as is typical - received no response whatsoever. Poor marketing and poor customer service really do go hand-in-hand in India and it disappoints me that these companies can afford to turn down such valuable business.


Not so with FoodWhizz cookery school - which I happened upon via a learning portal. Their website is modern, simple and informative - listing out a number of interesting looking alternatives. One of which was 'Mughlai I' (there is also Mughlai II and Mughlai III). Ideal. I emailed them and swiftly got a reply offering me date and time options. Then I rounded up the troops, and booked a class for three of us.
Within a week we had already pitched up at a homely looking bungalow in Goregaon East - right on the border of Sanjay Gandhi National Park. Chef Shwetambari (or 'Shweta') greeted us personally and sat us down in her sitting room. As we were thirty minutes early, the four of us chatted together about her background, family and training. She certainly had plenty of interesting tales to share! We were also introduced to her sister Priyanka. Priyanka is a lawyer by profession but also runs the customer care and marketing side of the business - and very efficiently so may I add. We were handed a set of neatly presented cooking instructions - which would form the basis for our three hour session. On today's schedule - Chicken Korma, Chicken Do Piazza (Do Piazza = 'Two Types of Onion'), Butter Chicken (Murgh Makhani), Lamb Rogan Josh, Chicken Shahi (with cashews) and Jeera (Cumin) rice. Quite a lot to squeeze into three hours I thought to myself!

Mughlai cooking is all about richness - dishes that contain expensive ingredients such as cream and nuts and are therefore fit for Indian Royalty. The cuisine was developed in the imperial kitchens of the Mughul empire and is a cooking style representative of North India - especially Rajasthan. Mughlai cooking also tends to be a bit milder than a lot of regional Indian cuisine. Which would explain why dishes - such as Korma, Do Piazza, Butter Chicken and Rogan Josh - are commonly found on British Indian restaurant menus. And of course it contains the meat that we are all so fond of when so much Indian cooking is vegetarian or fish-centric.
Once the kitchen had been prepared by Shweta's assistant Sudhir (a boy who proved to be most proficient at finely slicing onions and tomatoes!), Shweta proceeded to demonstrate the art of marinating. Most of our dishes required the meat to bathe in yoghurt (dahi) mixed with various spices for at least 10 minutes - to tenderise the chicken/mutton and let it be infused with the flavours. It was fascinating to see the repertoire of spices held in a standard kitchen cupboard and how different amounts and variations can substantially alter the taste of the dish.

In terms of equipment, only a few basics are required in the Indian kitchen: a food processor or mini-chopper (especially good for mincing ginger and garlic), a mortar and pestle (for freshly grinding our Mughlai spices), a pressure cooker (tenderises and cooks the meat much quicker and also liquifies down the onions into the sauce), a Kadai (an Indian wok), and a couple of basic pans. You also need lots of spoons and a spatula for getting every last drop out of the blender.

Despite our recipe cards with all the measures dictated - Chef Shwetambari added the spices by feel alone. I would love to be able to do this but I am a bit textbook when it comes to cooking. It was also interesting to see some of the spices and ingredients that are not so commonly found on British supermarket shelves - such as black cardamon; mace in whole form; whole fenugreek leaves (methi) and the red food dye that gives so many Indian dishes that wonderful rich colour. We also were shown a flavouring called 'Kewra' - which is the essence of screw-pine and is added to Korma as a final step. Only when we tasted the final article, did we appreciate how 'Kewra' makes a dish truly authentic and standout.

As I mentioned before, using a pressure cooker helps the onions to emulsify and disappear into the sauce during pressure cooking - I always wondered how this was done. I have cooked a lot of curry myself at home but somehow, it never tastes or looks restaurant quality. Through this class, I definitely picked up some hints and tricks for authentic Indian cooking and pressure cooking seems to be a necessity. I guess it will also help you to cook very quickly!
On the face of it, the recipes had many of their ingredients in common with each other, appearing quite similar. All the dishes contained dahi/yoghurt, all had onions, ginger and garlic and most had cardamom, cumin, cinnamon and garam masala. But the order in which the ingredients are added, the amounts which are added and whether the yoghurt is first used for marinating or added later to enrich the sauce all make a huge difference to the end result. And you must also understand the subtle differences. For example, it is important to use Kashmiri Chilli Powder, or it is important to use Mughlai Garam Masala....or it is necessary to fry off some Mustard Seed Oil to release the right aroma. You can't go using any old store cupboard variations if you want the proper flavour.

Below: some of the dishes during cooking: An unusually dark coloured Chicken Korma; Murgh Makhani (butter chicken), and Shahi Murgh (chicken with cashews and looks more like the Korma we know). 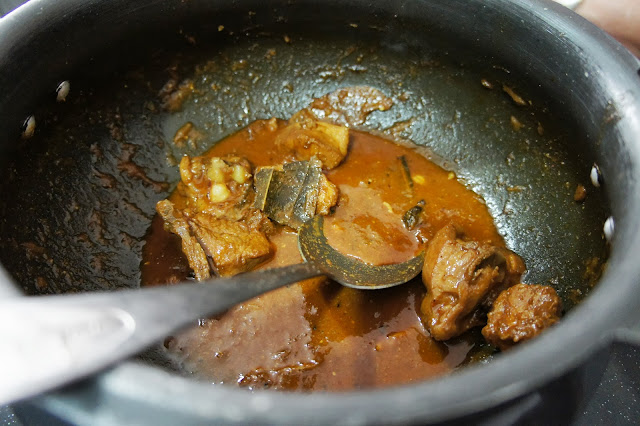 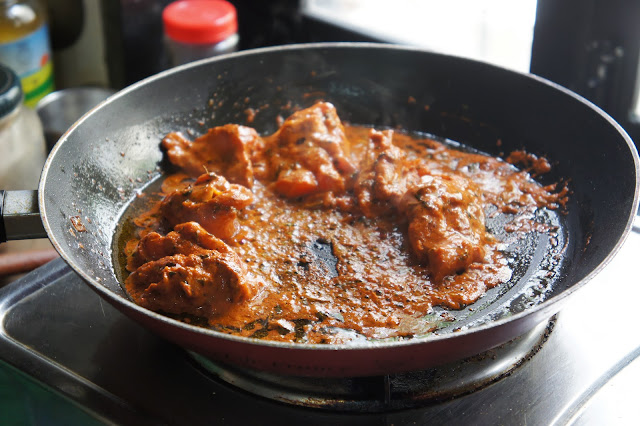 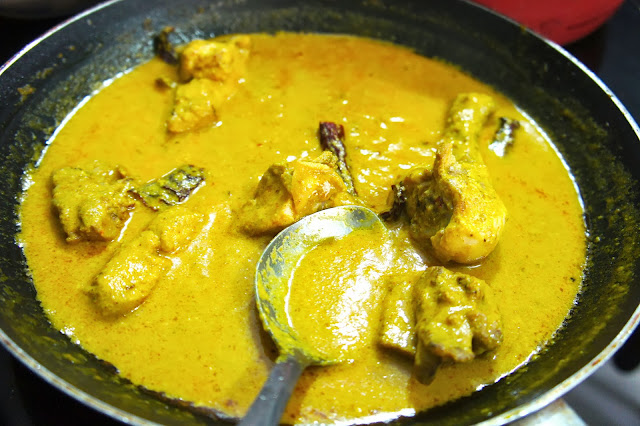 After three hours of solid demonstration by Shweta and a bit of participation by us (chopping onions, adding spices and stirring), we were finally treated to a tasting session. Which was just as well as it was lunchtime! Oh my god, I was totally blown away by the dishes - the subtle aromas and flavours, the textures, the varying chilli heat and degrees of creaminess. AMAZING! If I can come near to recreating any of these curries so beautifully back home, I will be very pleased with myself. Fodder for a future blog methinks....watch this space!

Thanks to Chef Shwetambari and Priyanka (and the kitchen boy) for making our first foray into 'professional' Indian cooking so enjoyable and interesting. We each paid 2,400 Rs for a three hour session which included the ingredients, recipe cards, bottled water and tasting session. And if you can't stand the Mumbai heat, then get out of the kitchen!
Find FoodWhizz Cookery School here or on Facebook

Chef Shwetambari recommends the 'Taste of India' (I & II) for total newbies. Mughlai cookery, we are informed, is more for special occasions although I personally, can eat it any time!