Well it's been two weeks since I last posted...I think that has to be a record on BombayJules.  Hope you're not feeling too bereft ;)

The reason being that I spent an amazing week away with Mr Jules - two days in Calcutta followed by four nights in Kaziranga National Park in Assam.  Actually make that five nights - due to a 'bund' on the day we were due to fly back, we were unable to reach the airport due to some pretty violent roadside attacks on cars by political activists.  We saw the car in front of us having its windows smashed in by nasty men throwing big rocks, so we turned back sharpish! 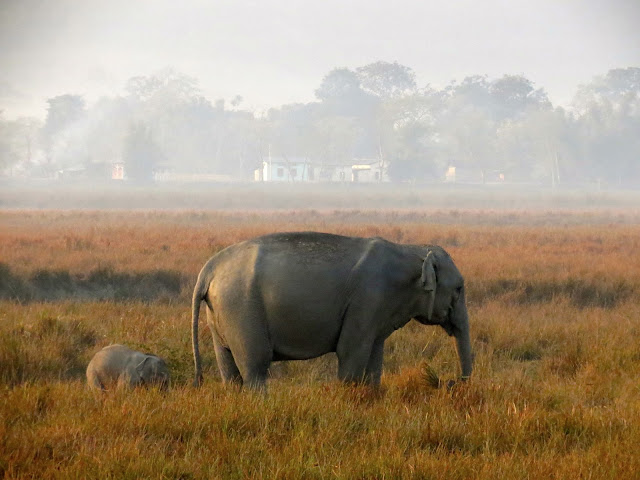 That aside, our time in the park was wonderful.  We saw 17 out of a possible 35 species of mammal and over 120 out of a possible 500 species of bird.  I know, quoting stats like that makes me officially a nerd.... yes, I know!  I have to admit, I have become a bit of a twitcher since moving to India (much to the delight of birding Mr Jules and his parents) .  But perhaps the effects will wear off in time....give it a chance.

I will come on to Calcutta in another post - this the most Raj-era of Indian cities.  A very fine place.

Kaziranga is probably one of the lesser known National Parks in India for spotting tigers and other wildlife - Ranthambore, Bandhavgarth and Corbett being the most famous. But in fact there are still around 106 tigers lurking in the long grass here, so it's worth making the trek (three hours flight to Calcutta, one hour flight to Guwahati and then five hours drive from there to Kaziranga).

As there are only something like 1,200 Bengal Tigers left in the whole of India, if you see one, you have to treasure the moment.  Unfortunately we only glimpsed one of these very endangered animals through binoculars from quite a considerable distance - I am not sure that such a sighting counts unless it is with the bare naked eye.


Even if you don't spot the elusive tiger, there is still a wealth of other exciting animals to see.  One Horned Rhinos, Asian Water Buffaloes and Indian Wild Boars were aplenty. Most importantly (after the Bengal Tiger), there were lots and lots of my favourite mammals - elephants - roaming around.  As well as solitary elephants, there were a few herds with their young - we even glimpsed a one month old baby with a group of protective females which was very exciting.  There were loads of the different varieties of deer in the park and otters playing in the lakes - but we also saw more unusual species such as giant black squirrels, a hog badger and a Hoolock Gibbon (apparently it's very rare to see one of those!)

Out of the birds we sighted, it was undoubtedly the Great Hornbill that caused the most delight.  I was amazed to be able to take the picture below. We also saw several species of eagles, vultures and owls and dozens of other, colourful birds.  We have referred to our various bird books and noted down the names if anyone is interested! 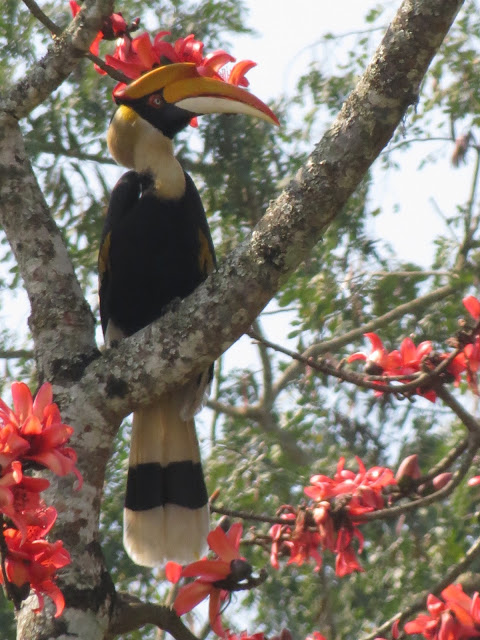 In all, we did seven safaris - six in a jeep and one on elephant back (one safari was on the day we turned back from the airport).  Of course, the one on elephant back was amazing.  We had to get up at 4.30 though, making BombayJules very grumpy.  We pitched up at the embarkation area in the dark and as it gradually got lighter, we could see these massive dark shadows moving towards us.  And then as the sun rose a bit more we could properly see the outlines of these magnificent beasts who had arrived to transport us through the early morning mist.

You mount an elephant by getting up on to a platform (looks like a bandstand) so that the elephant's back is level with your feet - then just swing your leg over and you're on.  An elephant safari means that you can get really close up to the animals as they are not freaked by the elephants and do not seem to notice the humans on top of them, (who are mostly wielding huge cameras and sporting the bright clothing which they recommend you don't wear!)


Our guide Somnath and his driver were marvellous - we had the same guys for all seven safaris. Somnath really knew his birds and was more eagle-eyed than the eagles we saw...spotting brown birds up against brown tree bark from quite a distance - shapes that just looked like smudges to me and which I still could not discern despite lengthy instructions to locate them!

Kaziranga has to be one of the least spoilt parks in the country.  The place was not over wrought with jeeps ferrying about huge numbers of foreign tourists (although we did encounter one VERY annoying group of British birders, shame on them).  If you want to spot a tiger, you have to sit and wait and watch patiently. There is no obvious grapevine where the guides ring around each other so that they can then rush you to the spot where the tiger is.  I am sure that this would take away the charm of making a sighting - I would rather not see a tiger than clash with 300 other people in an attempt to do so.

The local people in Assam retain a real innocence and the village children delight in running up to you to say hello (actually they shout BYE-BYE!, BYE-BYE! whether you're coming or going which is so sweet!).  Even better, you won't find a Kashmiri salesman (my pet hate) trying to flog you a crappy pashmina - and nobody puts their hand out for a hand-out.

But BombayJules style, I did still manage to eek out a retail opportunity!  In the backwater of a tiny village mostly inhabited by tea plantation workers, our guide (at my request to track down some handicrafts) showed us a small, local outfit producing hand-loomed fabrics.  Gorgeous silks and cottons - not as fine as you might find in Rajasthan but still with a certain rustic charm.  I purchased a simple mulberry silk dupatta for a mere 250 Rs (GBP 3),  a cotton sari type piece of fabric (which looks a bit like a pub tea-towel to be honest) for 150 Rs (GBP 2) and another, thicker hand-loomed silk scarf - which was more realistically priced at 1,500 Rs (GBP 20). Oh and Mr Jules bought himself a man-scarf, so charmed was he by this little money-making enterprise! Actually the enterprise is an NGO - and there to support local women who can sell their products in the shop and create a little financial independence for themselves.

Our hotel was pretty decent. The Iora Retreat is Indian run but it was managed so efficiently that I thought it couldn't be.  The  Iora is on quite a large complex considering the basic rural nature of the area - with most facilities including a good sized swimming pool and spa.  There are two restaurants, one serving standard Indian and Chinese fare, and another serving traditional Assamese recipes.  It was a shame that I had bad stomach ache for the whole week caused by my malaria medication - as I totally lost my appetite.  We therefore did not venture into the Assamese restaurant and I mostly survived the week on a diet of  plain fried rice.  And there weren't even any mosquitoes around in the end!  Our room was much bigger than standard and well furnished with a nice big balcony overlooking beautifully kept gardens.  The service in the hotel was exemplary - especially in the restaurant, the room-service and housekeeping.  And for about forty five quid a night, not bad value!

This holiday was a bit of a treat for Mr Jules who is an avid nature-lover and in fact it was probably my most favourite get-away after the Ambassador Car Rally that we did last October.  We are even thinking of going back - to see if the tigers will come out properly next time! 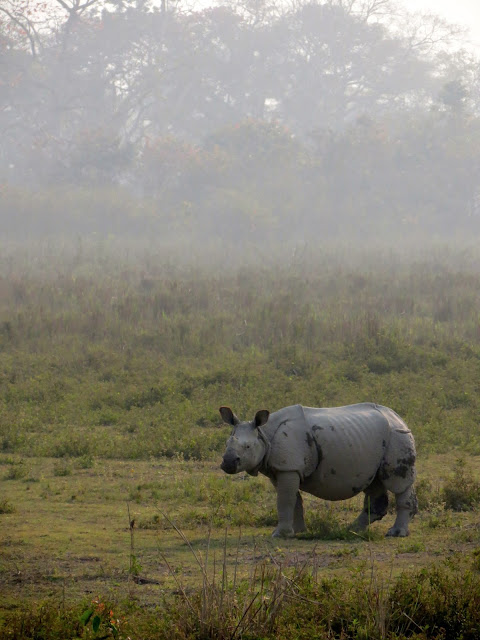