For any of my friends thinking that I am living in a retail wasteland, you really don't need to worry about me - because I've got Phoenix Mills.

When it's humid outside and you don't fancy battling the crowds of Crawford Market, sightseeing feels like a bit of an effort and getting out of town is too much like hard work, you can always pop down to Lower Parel to the air-conditioned designer retail/eating paradise that is Phoenix Mills.  When it comes to shopping, Mumbai has definitely come in from out of the cold (or should I say the heat) and this place is better than Westfields London.

Phoenix Mills is part of the 'High Street Phoenix' retail complex - an amalgamation of several shopping centres covering 3.3 million square feet.  You've got Skyzone which I think is the original structure containing Marks and Spencers (!!), Pantaloons - a type of clothing department store, Lifestyle, a small department store and a whole host of local brands.  Here you can also purchase a Subway sandwich.  Skyzone is connected via a courtyard to another covered area called Grand Galleria which has all sorts of Western and Indian brands as well as Fab India, the Bombay store (both good for buying untacky souvenirs) and Croma, India's biggest electricals chain.  In another outside courtyard area is Hamley's toystore (I need to check out the prices to see if it is as expensive as the UK), Staples and "Big Bazaar" - probably the only supermarket chain in the whole of India (under renovation at the time of writing so I have not yet been able to investigate)

And then the pee-ess de resistance - Phoenix Mills itself, a very modern designer air-conditioned shopping mall on four levels with attached parking, containing the creme-de-la-creme of western brands. Here we have Burberry, Hugo Boss, Tommy Hilfiger, Bo-Concept, Zara, Mango, Diesel, Tag Watches, Estee Lauder, Mac, Clinique to name but a few.  There's an even posher bit called 'Palladium' which hosts Gucci, Jimmy Choo, Bally, Etro, Bottega Veneto and Paul Smith.  For the high end labels,  I would say the prices are higher than in Europe (yes I've had a good look) due to import taxes so you won't find me buying anything there.  I will leave that to the Bollywood stars and Mumbai billionaires.  In India, Zara, Acccessorize and Mango are considered higher end brands than in Europe but we have found that any clothes that are manufactured within India itself are a lot cheaper  than can be found in Europe.  For instance Tommy Hilfiger and Biba.

There are plenty of nice places to eat at Phoenix Mills. Indigo Deli is a favourite where you can indulge in a cappucino and a slice of chocolate cake, (as well as a huge range of western dishes) and you can also pick up a French Baguette and some Brie while you're at it.  On the ground floor there is an outpost of Moshe's for Lebanese style fare, teas and coffees.  On the top floor is a range of Indian restaurants including an excellent Punjabi "Punjab Grill" for succulent kebabs and rich curries and the Manchester United cafe bar and shop (yes, that bit disgusts me, Manchester United is a huge brand in India and I can't quite believe it has dirtied this pristine shopping centre).  Also at the top is the 'Food Hall' which is predominantly filled with expat cooking ingredients...tins of tomatoes for £1.50, Perrier Water for £3 a bottle and packets of Cheerios for £7... as well as all manner of hams and cheeses. I particularly like the fabulous selection of clean, fresh and beautifully packaged vegetables (a total cop-out for those of us with fragile stomachs), and the baked goods are really very good.  The prices are obviously high for the imported goods but the vegetable prices aren't really that much more than you would find at the local market.

See.  You don't really need to worry about me! I'm really OK! 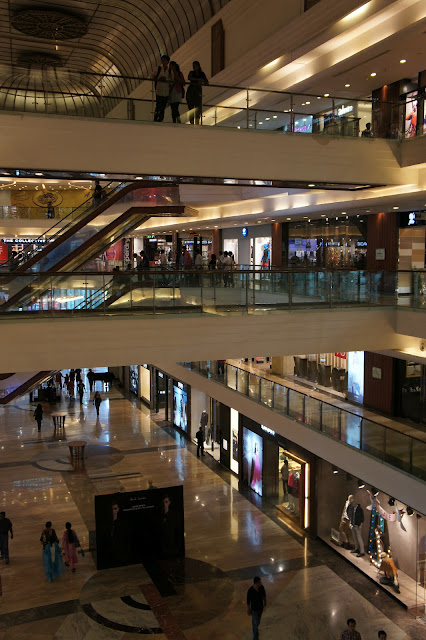 
Here is the link to Phoenix High Street website http://www.highstreetphoenix.com/ for a full store listing