It's not usual that I am the last to know about something. Especially when it comes to shopping.  But I was definitely not in the know when it came to Harry - Star Jeweller to the Expat Wife.

I told my friend MaximumCityMadam, that I had a 100 year old pendant that had been passed down to me by my mother's godmother which contained a pretty ruby - and that I wouldn't mind having this ruby re-incorporated into a ring (as I am not much one for jewellery but I do quite like rings).  That's when MCM (the font of all shopping knowledge) told me about Harry - based at the Grand Hyatt hotel in Santacruz - 'where all the expats go to have their jewellery made'.

Well it can be hard to trust people when it comes to matters of gold and diamonds and so I was very happy to go on MCM's recommendation.  And the three times that I have since been to Harry's shop 'Living Jewels', I have always been at the back of a queue of western women and men waiting to have a consultation with Harry.

So on my birthday, off I went with MCM to see Harry - clutching the ruby pendant which had such sentimental value to me but was unwearable.  Mr Jules had kindly offered to pay for the making up of the ring as a birthday present - providing the price was reasonable.  I also brought a picture of what I envisaged the end product to look like - a sort of Art Deco design with my ruby at the centre surrounded by tiny diamonds with a few more diamonds on the shoulders (well I was going to try my luck if Mr Jules was paying!).

It took all of five seconds for Harry to look at my stone and the suggested design for him to agree 'no problem' and a reasonable price for the white gold shank and diamonds. Harry also explained to me that his jeweller craftsman was soon going back to his village for a holiday, and so he would get a shank made up right away so I could approve it before the setting of the stones.  The setting would be ready for approval by the following Monday (this was a Friday).  Excitedly, MCM and I went off and spent the rest of the weekend celebrating my birthday, leaving everything with Harry.

Come the following Monday, I unfortunately had a very poorly stomach, so couldn't make it back to Harry's shop to have a look at the setting.  But that was no problem at all because Harry offered to send his son Akash to our apartment for me to approve it!  Within 30 minutes, I was looking at the rough white gold shank which just looked like a piece of tin! But the shape was there and I was really pleased - and so no alterations would be required.

An incredible two days later, and my ring was ready to be collected (that's five days in total!) This time I was well enough to make it to the shop, dragging along Mr Jules with his credit card. When Harry opened a neat, red box to reveal my gleaming, sparkling, new ruby ring, I was blown away! That sad old stone in its disgusting old yellow-gold setting looked completely different....and huge!  Turns out that my li'l ol' ruby is nearly two carats in weight and not in bad condition.

So of course I would like to recommend Harry to anyone who would like a bespoke piece of jewellery made. His service, is fast, accurate, reasonably priced and trustworthy.  Actually I have already been back with a deep lilac amethyst that I bought in Jaipur, which is being made into a silver ring - and due to be picked up this weekend (so excited again!)

Harry is a real character and he works closely with his handsome and charming son to deliver whatever you have in mind.  Not all business is bespoke orders - if you are looking for a quick purchase (as most visitors staying at the Hyatt will be), his shop is full of ready to buy jewellery and knick-knacks. 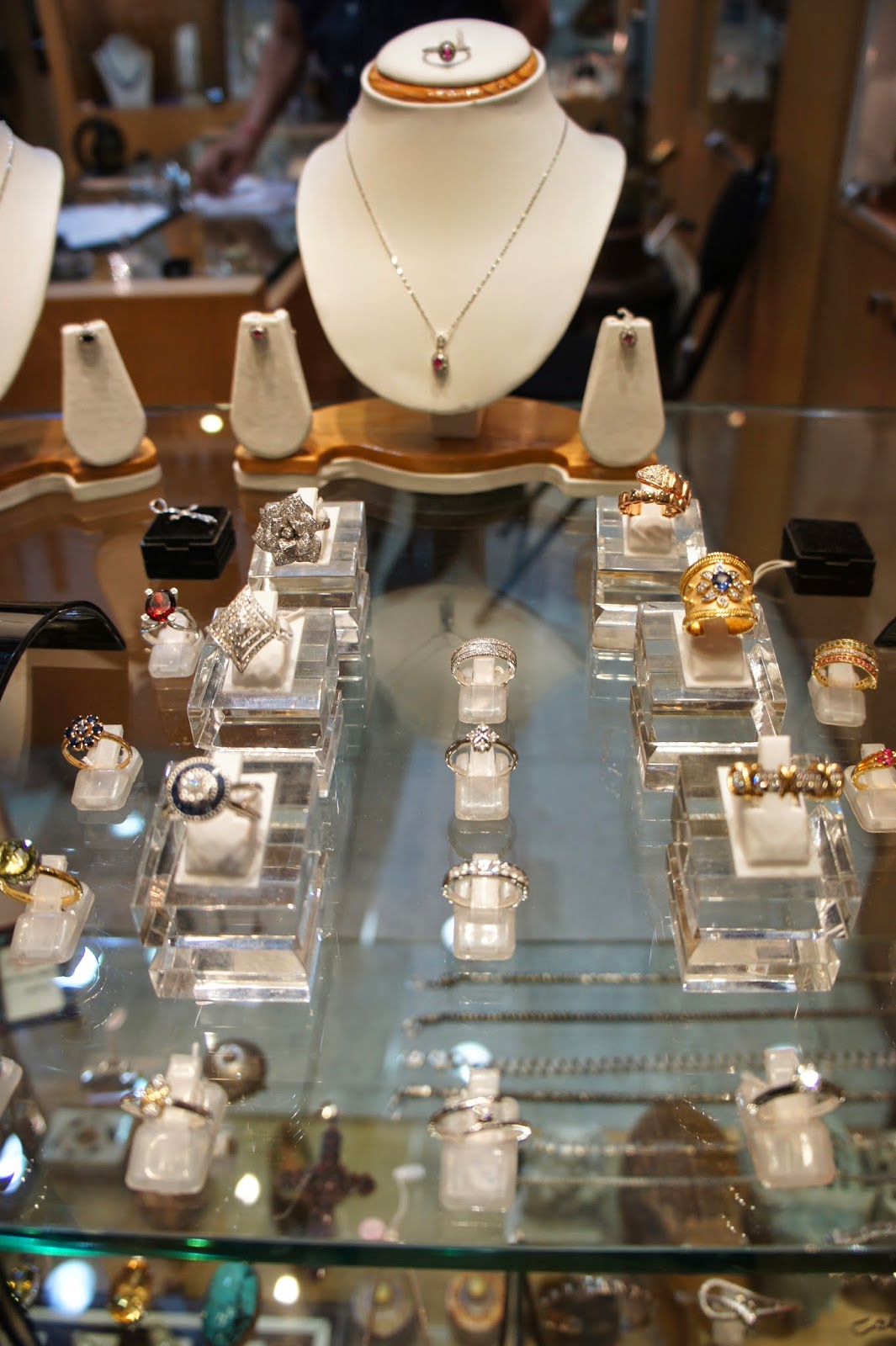 The shop is located on the upper level of the shopping plaza of the Hyatt - towards the rear of the hotel (next to Popley's). Husbands struggling for gift ideas should take note!!!

Email ThisBlogThis!Share to TwitterShare to FacebookShare to Pinterest
Labels: shop