Auroville - The Town That Never Was

On our last day in Pondicherry we took the 30 minute drive to Auroville, a new age township and vision of 'The Mother', who was the closest collaborator of Sri Aurobindo (mentioned in my last post).

In the mid-1960s The Mother (real name Mirra Richard) guided the founding of Auroville, an international, but experimental township endorsed by UNESCO to "further human unity" near Pondicherry.  This was to be a place "where men and women of all countries are able to live in peace and progressive harmony above all creeds, all politics and all nationalities." Nice thought.

The 4 point charter that governs the vision - which in my narrow minded view is a load of Utopian and idealistic hippy nonsense - is as follows :

Auroville (the "City of Dawn") was inaugurated in 1968 in a ceremony in which representatives of 121 nations and all the states of India placed a handful of their soil in an urn near the center of the city. Auroville, which is supposedly still developing, currently has around 2,100 members (1,600 adults and 500 children) from 43 countries, though the majority consists of Indians (around 850), French, and Germans.

In actual fact this number is only a small fraction of the 50,000 inhabitants that The Mother envisioned for the township. And when you compare images from Google Earth with the the original plans, you can see that most of the construction has not been realised either.

Probably the biggest draw to the town for 'outsiders' such as ourselves (I say this as to get a proper look inside the complex you need to prove a genuine interest in order to be provided with a pass) is the Matrimandir.  The Matrimandir is a giant golden globe at the centre of the town, surrounded by beautifully manicured lawns and trees.  It is a pleasant 1km walk from the visitor's centre, along wooded paths and past an astonishing banyan tree.


Again, conceived by The Mother, the globe is "a symbol of the Divine's answer to man's inspiration for perfection". To most of us, it is just an architecturally pleasing and rather fantastic futuristic golden ball. It would have made a marvellous backdrop to all those 60s space-age films. Ashram disciples and Sri Aurobindo followers practise their yoga within the spherical walls of the globe...which apparently contains 56kg of gold sandwiched between thin sheets to reflect the sunlight. I can't imagine how much this 37 year project (started in 1971, completed in 2008) must have cost the Sri Aurobindo foundation (or perhaps the Indian Government?) and I have no clue as to how it was financed.

Entry to Auroville to the day visitor is free.  The way Auroville makes their money out of tourists is from the shopping complex and restaurant at the visitor's centre.  Here you will find things crafted by the inhabitants of the township such as clothing, candles, incense, pottery, home textiles etc.  I have to say that the quality is very high and some of the clothing is really beautiful.  I quite liked some of the ethnic tops and dresses with western and stylish French influences.  The shops are a bit pricey though and the sizes on the small side (these yoga types don't eat much).


We had a quick lunch in the restaurant - to which I believe ingredients are farmed and supplied from the township itself - Auroville is particularly famous for its cheeses and I had a beautifully fresh carrot and beetroot salad with feta crumbled over the top (this is how yoga types fit into small clothing).
We did find Auroville a bit weird....in an occultish sort of way.  There are even gates all around the place with golden symbols leading to I don't know where...

Worth a visit though. 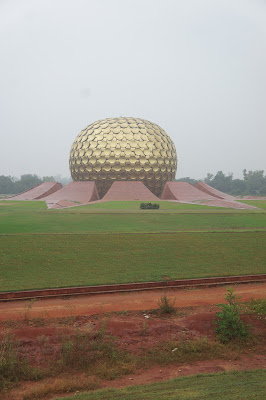 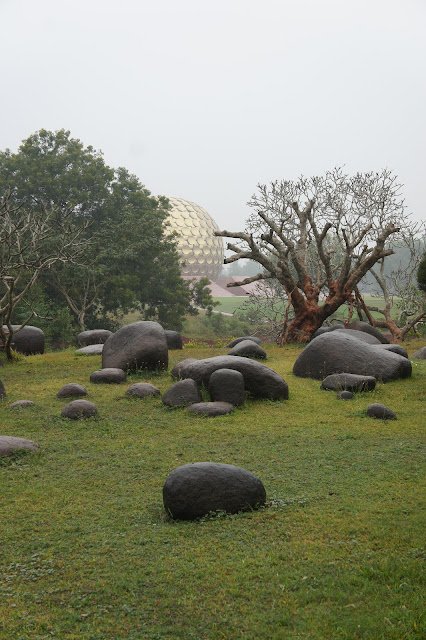