I hope you all had wonderful times over Christmas with respective friends and family.  We have been on our Indian travels again, for a well deserved break earnt by Mr Jules.

Despite coming down with severe Delhi Belly on Christmas Eve (I never pinned down the source), we somehow managed to make it to our Christmas holiday destination of choice – Pondicherry – on Christmas Day.   We flew from Mumbai to Chennai (two hours) and then hired a car and driver for the three hour onward journey to Pondicherry without ‘incident’.  Unfortunately, I was in bed most of Boxing Day and the next day which wasn’t great but I did manage to have a couple of walks and a good half day in Pondicherry.  We also managed a daytrip to the new-age town of Auroville (please see my next post) and I was fine for our last night’s stay in Chennai. However, in Chennai (also more on that later) we got caught in the tail end of the east coast's second monsoon and were confined to our hotel during a 24 hour downpour.  Not one of our more successful trips!

Pondicherry (now known as Puducherry but more affectionately as 'Pondy') is an ex-French Union Territory in the state of Tamil Nadu (on the lower east coast) which was ceded back to India in 1954.  The location has further been brought to light in recent weeks following the release of the film Yann Martell’s Life of Pi – the story of which opens at the Zoo in Pondicherry’s Botanical Gardens.
By Indian standards, this is a neatly planned town – Pondicherry was built using the French grid system and still retains leafy streets with French place names and colourful colonial French architecture.  The town is split into two distinct areas – the ‘French Quarter’ and the ‘Tamil Quarter’.  Unfortunately, a stinking rubbish filled canal separates the two – you know when you are about to hit the Indian side of the town.
On the peaceful and relaxed French side, the French language is spoken heavily.  Many of the residents are French, many of the shop and restaurant workers are fluent in the language and from first impressions, most of the tourists are French.  Apart from the Tamil pilgrims walking the long promenade, we were one of a handful of British, American and German visitors staying in the town.


One of the biggest draws of Pondicherry is the Sri Aurobindo Ashram – a ‘spiritual community’ which attracts followers from all over the world.  From what I could tell, Sri Aurobindo retains a wealth of real estate in the town, both in the French and Tamil Quarters.  It is almost as if Sri Aurobindo ‘owns’ Pondicherry.  As well as the Ashram and all of Auroville, there are schools, libraries, research facilities and shops owned by the organisation.
The Ashram attracts a lot of what seem to be single (presumably divorced) middle aged women to the enclave.  Women, who have clearly watched too much Eat, Pray, Love (starring Julia Roberts), come to find themselves, forget their cheating husbands and refresh minds and bodies.    I saw so many of these women walking alone on the streets of Pondicherry that I felt a bit sad for them at Christmas time.
What made me even sadder were the Ashram/Hippy/Traveller fashions.  I have a sincere hatred of balloon pants, Birkenstocks and dreadlocks (I intend to devote a post to this sometime) and in my mind there is no excuse for sporting these offensive items in public. (Note: pyjama shaped clothing should be strictly assigned to the bedroom).  I found it disappointing that Pondicherry was full of so many balloon pant wearers.  Merde.


Pondicherry Shopping
The shops in Pondicherry - on the French side - are in another class altogether.  With prices to match.  Due to my illness I was not able to investigate them as thoroughly as I normally would (!) but it only took two or three looks before I realised that the shops were too overpriced (and a bit too arty) to bother.


There are a couple of nice boutiques – Via Pondicherry on Romaine Rolland sells unusual sequinned/embroidered bags, ‘ethnic fusion’ pashminas and quirky housewares.  The Neemrama shop at Hotel L’Orient stocks nicely curated items such as camel bone placemats, serving spoons and picture frames.  We bought a posh pair of silver egg cups with covers here (completely useless items!)  Around the corner is Living Art, with a selection of brassware, upcycled shoulder bags, women’s clothing and shoes (including some nice Mojari style flatties).  There are also several large colonial antiques showrooms but I didn’t find anything I couldn’t pick up in Chor Bazaar or Camelot.  And I am sure it would all have been very expensive.
The Sri Aurobindo Ashram has boutiques of its own but I wasn’t particularly impressed by the range of handcrafted papers, candles and incense sticks. I would rather buy my stationery at Chimanlals in Mumbai.  Sri Aurobindo does have a fantastic shopping complex at Auroville though (which I will write about in my next post).


By far the best place to buy a true souvenir of Pondicherry is at the embroidery school opposite Hotel L’Orient on Romaine Rolland.  This place, a beautiful French Colonial convent is run by nuns who teach local women how to sew the gorgeous French style linens.  We bought some hand embroidered napkins and hand towels in a stiff linen.  Although the prices are also a bit stiff at 400 and 700 Rs respectively for these items (£4.50 and £8.00 each), at least you are paying something back to help sustain these women’s livelihoods – and the stuff is beautiful!
Our Pondicherry Hotel
We stayed at a Neemrana ‘Non Hotel’ – Hotel L’Orient on Romaine Rolland (handy for the invalid shopper!) – a heritage property beautifully restored from an old school building.  Our room - named Karaikal - was full of fantastic colonial antiques with a huge terrace overlooking the central courtyard.  The bed was ridiculous though – so high up that we needed steps to get on to it!


The food was pretty good at the hotel – I convalesced with a decent steak and chips – but the service was a bit chaotic (‘Non Hotel’ perhaps means ‘Non Service’?). 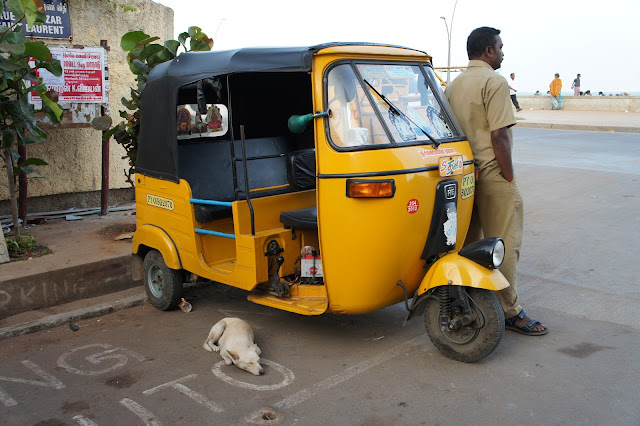 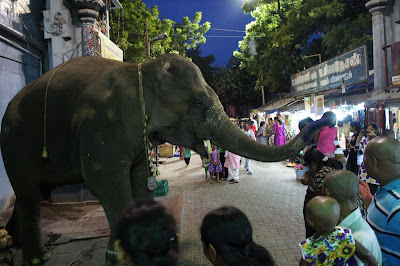 ﻿
For anyone thinking of making the trip to Pondy, I would like to recommend this taxi service to and from Chennai Airport.
http://www.pondicherrytaxiservice.com/
Email; pondicherrytaxi@gmail.com
I received many quotes for upwards of 3,500 Rs (one way) for a car and driver from other companies.  Pondicherry Taxi Service charges 2,350 (plus airport parking and tolls of about 250 Rs which you pay separately) for a Tata Indigo.  The company communicated with me by email and text at all times, the driver was always there and waiting, the cars were clean and they drove safely. The journey only took about three hours including a chai stop. You will find that the roads are in much better condition than in Maharashtra and the traffic not half as manic!
Posted by BombayJules at 19:30